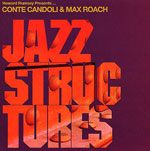 The inclusion of Max Roach's name on the cover of Jazz Structures is somewhat disingenuous. Upon opening the CD insert, we're informed that Max Roach appears on only four out of eighteen tracks. This information was conspicuously absent from the back cover, where a potential buyer would look to see if a disc's worth spending hard-earned cash on.

Jazz Structures is a reissue of two of Howard Rumsey's "Light House All Stars discs. The first, 1957's Drummin' the Blues, featured Roach on four tracks. Stan Levey is the drummer on the other fourteen.

When present, Roach does what he always does: he knocks it out of the park. The Lighthouse All Stars were the kings of West Coast-style bop and Roach had worked with them as early as 1954. In 1956 alone, Roach played on some of the most important records ever made, like Monk's Brilliant Corners and Sonny Rollins' Saxophone Colossus and several sides with Clifford Brown. By 1957, he was worlds beyond Rumsey and Co. and ready to re-shape the music yet again—this time with Booker Little.

The second album tacked on here, the original Jazz Structures (1960), has little in common with the upbeat swing of Drummin' the Blues—aside from boasting much of the same lineup. This was the soundtrack to a documentary by filmmaker Les Novros about the construction of LA's Union Oil building. And it feels like a building being constructed: in places it's laborious, rigid, tedious. In others, it's decorous and light. Jazz Structures came just three years after Miles Davis had revolutionized the film soundtrack with his work for L'Ascenseur Pour l'Echafaud. Structures doesn't compare, but Bob Cooper, who scored the work, did a good job, considering the subject matter.

There's some interesting work here by Bud Shank (alto and flutes), Conte Candoli (trumpet), and Red Callender (bass). A playful, circuitous riff pops up on "Architectronics and resurfaces again in the "Directional Suite, where it's reconfigured as "Automatons. Refreshingly untampered-with production helps; it sounds a bit like one of those old quarter-inch-think vinyl jobs. The slightly lo-fi analog production adds a stark, concrete edge. Jazz Structures is a good soundtrack, probably better than the film that inspired it—but it's not a Max Roach album.