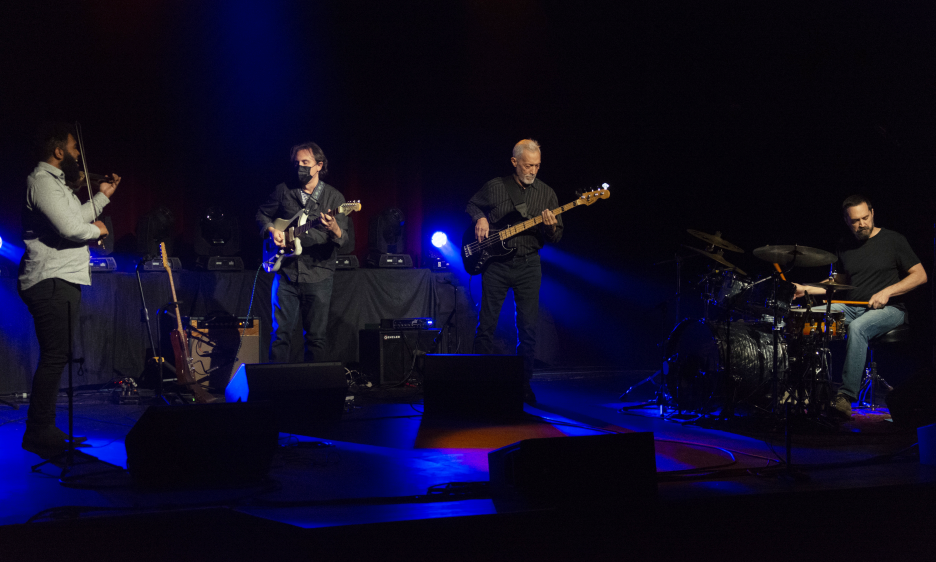 There is a history of jazz-oriented covers of rock bands, especially of the jam-oriented ones with an improvisational practice that is at least somewhat jazz-compatible. Jazz Is Dead has been interpreting the music of the Grateful Dead off and on since 1998, and more recently Jazz Is Phish has done the same for the music of the jam band Phish. Heavy metal avatars Led Zeppelin also had a strong improvisational bent—as Jazz Is Led leader Curtis Wingfield put it, they "never played a song the same way twice."

Jazz Is Led is made up of violinist Emanuel Wynter, guitarist Troy Conn, bassist Ron Brendle and drummer Curtis Wingfield. The concept is straightforward: instrumental jazz fusion versions of Led Zeppelin songs (with Wynter typically taking the vocal part). But with improvisers of this caliber the possibilities are wide-ranging, including rock, folk, reggae, World Music and even swing (occasionally). The set began with "The Song Remains The Same" from Houses of the Holy (Atlantic, 1973), Brendle's bass guitar taking the lead during the driving introduction. They stayed with the same album for the folkish "Over The Hills And Far Away," which featured solos from the entire band. Conn's guitar solo had a definite jazz flavor, and Wingfield's drum solo was accompanied by the song's riff.

"Misty Mountain Hop" from Led Zeppelin IV (Atlantic 1971) inspired a hairy Conn guitar solo, before moving into a mashup with "How Many More Times" from the debut album Led Zeppelin (Atlantic, 1969). "Friends" from Led Zeppelin III (Atlantic, 1970) began with a legato improvisation over a drone—a nod to the Middle Eastern sound of the original—before transitioning into a swing feel. A band playing Zeppelin songs with a violinist has got to cover "Kashmir" from Physical Graffiti (Swan Song, 1975). But this version began with a sly unaccompanied fuzz bass solo. After an extended start-and-stop section, guitar and violin traded solos before returning to the head. Wingfield paused to introduce the band.

"Since I've Been Loving You" from the third album occupied the blues slot in the show, as it had at most Led Zep concerts since its introduction. Appropriately, Conn began it on guitar, and after the theme he contributed an intense blues solo (just the blues: no jazz, no fusion). Wynter's violin was especially vocal as he covered Robert Plant's part. "Whole Lotta Love" from Led Zeppelin II (Atlantic, 1969) was hard to recognize at first, recast into a reggae rhythm. Once again the violin took Plant's big solo. "Moby Dick" from the same album set up the big drum solo, as it always had for drummer John Bonham. "Black Dog" from the fourth album was also given the reggae treatment, the theme played in double time.

"No Quarter" from Houses of the Holy began with an epic unaccompanied finger style guitar solo, evoking classical guitar playing as well as utilizing harp harmonics extensively. Conn followed that performance with a high energy solo during the piece. "Dazed and Confused" from the debut album included a fast swing section after the theme—not something that Led Zeppelin would have played, but it fit perfectly. For the encore the band played "Out on the Tiles" from Led Zepellin III, another reggae treatment. Wingfield described it as a "deep cut," despite its great Jimmy Page riff. The band's repertoire is heavily balanced in that direction: they have not covered "Stairway To Heaven," although they have not ruled that out in the future. It would be fascinating to see what they would do with it. But in the meantime there is plenty to enjoy, for jazz and Led Zeppelin fans alike.