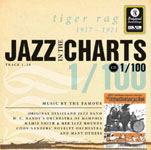 The folks at Germany's Membran have completed a fascinating take on the history of jazz aptly named Jazz in the Charts. In the process, they have developed a one-of-a-kind compilation of every jazz recording to reach the Billboard charts between the years 1917 and 1954, years when jazz was truly America's popular music.

A massive one hundred-CD collection, it includes 2,211 recordings with each CD devoted to multiple years or, at the height of jazz's popularity, multiple CDs devoted to a single year. Like the label's other comprehensive collections, such as the 168-CD Ultimate Jazz Archive, the packaging is exceptional and a complete set graces a shelf. These are all original recordings remastered in superb 24 bit/96khz sound that has these nuggets sounding better than ever.

Now approaching ninety years later, Volume 1: Tiger Rag, covering the years 1917-1921, intrigues as it chronicles the beginnings of jazz as popular music. During a time when most New Orleans musicians were unknown nationally, The Original Dixieland Jazz Band hit the charts with "Livery Stable Blues. Jazz historians are not often kind to the ODJB, who are painted as pale imitations of the "real thing. They weigh in here with almost half of the cuts in these earliest years and, although light on improvisatory acumen, in the context of the popular music of the day they must have been revolutionary with their exciting stage show and performances that combined novelty with up-tempo dance music.

Two other artists that are much in evidence on Volume 1 are clarinetist Wilbur Sweatman, the first African-American to release a jazz recording, and Mamie Smith, the first African-American female to record blues vocally and whose Jazz Hounds featured pianist Willie "The Lion Smith. Volume 100: Mood Indigo highlights 1954 as jazz's popularity was receding with tunes by Armstrong, Basie and Nat King Cole. The remaining CDs include everything and everyone else to break into the American charts: Membran has issued in one place a series that will be of interest to the casual fan as well as the scholar.