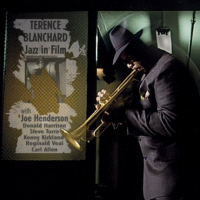 If you're attracted to jazz that evokes late nights, dark corners and glittering cityscapes, Jazz In Film is a must-have. This is about as classy a collection of after-hours jazz as you're likely to hear. The music is emotional, strongly melodic and beautifully atmospheric.

Terence Blanchard has written four film scores as Spike Lee's jazz composer of choice, but he mostly mines other people's work on this excellent CD, a collection of nine movie themes.

Like a hair-raising film noir, Jazz In Film is dramatic and sensuous. Some of these songs feature quick twists and turns, but most are richly romantic.

Blanchard makes discriminating use of strings, and he cleverly deploys his players to create a specific mood on each track. For instance, Kirkland uses low notes to establish an intense mood on Ellington's "Anatomy of a Murder." Joe Henderson's tenor sounds more soulful on this CD than on his own recent recordings. Donald Harrison shares a special chemistry with Blanchard on three tracks, and the alto man delivers a beautiful solo on Quincy Jones' "The Pawnbroker."

Other cuts include Jerry Goldstein's melancholy theme from "Chinatown," Andre Previn's murky tune "The Subterraneans," and Bernard Herrmann's "Taxi Driver," a surprisingly romantic track for a film about a demented psycho killer. Alex North's "A Streetcar Named Desire" and Ellington's "Degas' Racing World" (written for a movie that was never released) are intensely sentimental but never schmaltzy. Elmer Bernstein's boppish "Man With The Golden Arm" and Blanchard's own "Clockers" round out an elegant collection.

It's strange that more jazzers don't cover melodic movie themes, especially since the pop genre is so barren of adaptable melodies. Maybe more artists will look to the movies after they hear Terence Blanchard's superb Jazz In Film.