By Samuel Chell
December 25, 2006
Sign in to view read count 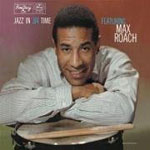 At the time of its appearance in 1957, this album, currently part of the limited EmArcy reissue series, was considered somewhat revolutionary due to its all-waltz program. That's become a moot point after all of the triple-meter jazz material that would follow—from "All Blues" to "Waltz for Debby" to "Someday My Prince Will Come." What makes this session essential listening is the masterful solo work, and not simply by Sonny Rollins.

With Clifford Brown gone, trumpeter Kenny Dorham makes each of his turns, as usual, an adventure in melodic and rhythmic surprises, deliberately getting himself into trouble and always finding a way out. And whereas Rollins almost overcompensates for the absence of Brown, playing these tunes with broad and ballsy, aria-like bravado, Dorham takes the tunes inward, not afraid of the empty spaces where the poetry often resides, and in the process looking forward to a more subtle, implicit rhythmic approach to jazz waltzes, such as Freddy Hubbard's "Up Jumped Spring."

The enigmatic pianist Billy Wallace, who made this single auspicious recorded appearance then disappeared into various urban lounge scenes, is one of the few truly ambidextrous bop pianists. On the opening "Blues Waltz" his solo sounds like Monk playing counterpoint with himself; on his remaining solo spots his interdependent melodies and rapid, two-handed octaves are reminiscent of Phineas Newborn, Jr. Whether or not his saucy, copy-cat rejoinder to Dorham's complex solo on "Lover" was appreciated by its originator, Wallace can't help but impress the listener with his ear and quick instincts. He's a far stronger player than his predecessor, Richie Powell, who perished in the same car crash that took Brown's life.

Besides the pop standards, Rollins' "Valse Hot" is a lovely composition, an extended 3/4 melodic equivalent of Brown's "Joy Spring." During each of his solos he clearly exudes a Viennese spirit, bringing to his deliberative, assured melodic constructions the singing bravura of a great tenor, legit or otherwise. It's a performance that clearly ranks with his work on the revered, almost contemporaneous Sonny Rollins, Vol. 2 (Blue Note, 1957).

Roach catches the lilting dancing spirit with heavily accented downbeats on his own "Little Folks, prompting both Rollins and Wallace to go for the gold on their solo turns. And for a change the relatively unfamiliar triple-meter holds down the tempos just sufficiently to allow Roach's bassist, George Morrow, to play some melodic lines during his solos.

There seems little doubt that this is the best post-Clifford Brown, Roach-led session on record—demonstrating that the fall of the drummer's ensembles from the visibility they once shared with Blakey's and Silver's groups cannot be entirely blamed on the loss of Clifford Brown (though nothing can detract from the luster of this musician's favorite). Consequently, as the only recording by this particular cast (there would be one sequel but without Billy Wallace), Jazz in 3/4 Time is a session that brings with its pleasures no small amount of regret about what might have been.