Miles Davis: Jazz at the Plaza 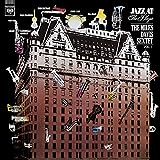 Partying at the Plaza! That’s what the Miles Davis Sextet was doing in the late summer of 1958—celebrating the success, popularity, and ubiquity of Jazz music. This set captures the exuberance and creativity of one of Jazz’s great outfits during this highpoint for improvised music.

On this set, the Miles Davis Sextet that was shortly to create Kind of Blue represents a confluence of Jazz greats synthesizing innovative music from their disparate sounds. Continuing their dynamic established in the earlier quintet, Miles blows tersely lyrical solos while Coltrane plays spiraling, vertical ones. The opening “If I Were a Bell”, where Adderley lays out, emphasizes the dichotomy between the two: Miles states his piece precisely in a muted voice; Coltrane stretches out boldly, thundering up and down, while maintaining a connection with the melody.

Bill Evans’ pairing with the funky, heavy-grooving Chambers and Cobb provides dimension to the ensemble’s sound. His solos on “Oleo” and “Straight, No Chaser” show he has the vocabulary to navigate a rhythmically demanding environment, but always in his introspective manner. Evans’ truer nature emerges on the ballad, “My Funny Valentine”, where his propensity for block chords and pedal use appear.

The presence of Adderley infuses the group with an earthy bopishness and offsets the seriousness of Miles, Coltrane and Evans. Adderley plays in a manner apparently reserved for his stint with this sextet: his solos on “Oleo” and “Straight, No Chaser” evince a pace and a quantity of notes distant from the funky, soul-jazz style that would become his characteristic sound as a leader. These solos sport a technical, bebop flavor.

This first CD reissue of the 1958 concert at the Plaza Hotel (originally issued in 1973) represents one of the few extant recordings of the short-lived Miles Davis ensemble responsible for one of Jazz’s near-perfect albums and documents the evolution of this group’s sound.

If I Were a Bell; Oleo; My Funny Valentine; Straight, No Chaser