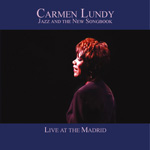 It was probably close to twenty years ago that I saw Carmen Lundy perform in a small group setting to a non-jazz audience; she sang her own lyrical compositions. My thoughts were that it wouldn't be long before she would become a public persona. Although Carmen Lundy has recorded for several labels since, and each of these efforts is on the same artistic plane, it would appear that she has broken no real ground.

The release of Jazz And The New Songbook, recorded live in concert at Los Angeles' Madrid Theatre last year, should correct all that. Revisiting her songs and adding new ones, Lundy recorded this two-disc album with some of the best jazz musicians in the country.

Lundy opens with an up-tempo, romantic love song, "Something To Believe In," on a perfect note. Billy Childs' piano solo and Bobby Watson's tart alto statement heighten the effect as Lundy swings mightily. On "One More River To Cross," co-written by Deborah Ash, an exotic flavor is added from Steve Turre's conch shell, Mayra Casales' percussion and the LA String Quartet. During this piece, Lundy recites the words from a Langston Hughes' poem, "The Negro Speaks Of Rivers," which will sound familiar to anyone familiar with the early-1970s Gary Bartz piece "I've Known Rivers." On "Where'd It Go," co-composed with brother Curtis Lundy, the singer reaches far into the stratosphere for the finale (her range goes from soprano to contralto), spurred on by fine solo work from Robert Glasper (piano) and Bobby Watson (alto).

Other highlights include a downtempo New Year's song, "Happy New Year," which ought to stand the test of time, as well as an ambitious new composition, "Afrasial," which features such elements as Turre's conch shells, African rhythms and a melodic chorus from Krystal Davis Williams and the LA String Quartet. Mark Shim takes an attention-grabbing solo on tenor sax during "Long Journey Home," recalling a superior way of making the ballad even better.

The final three songs are presented as "bonus tracks" since, due to a power surge, they were only recorded as "monitor mixes." They include Lundy's "Good Morning Kiss," from her 1986 debut album.