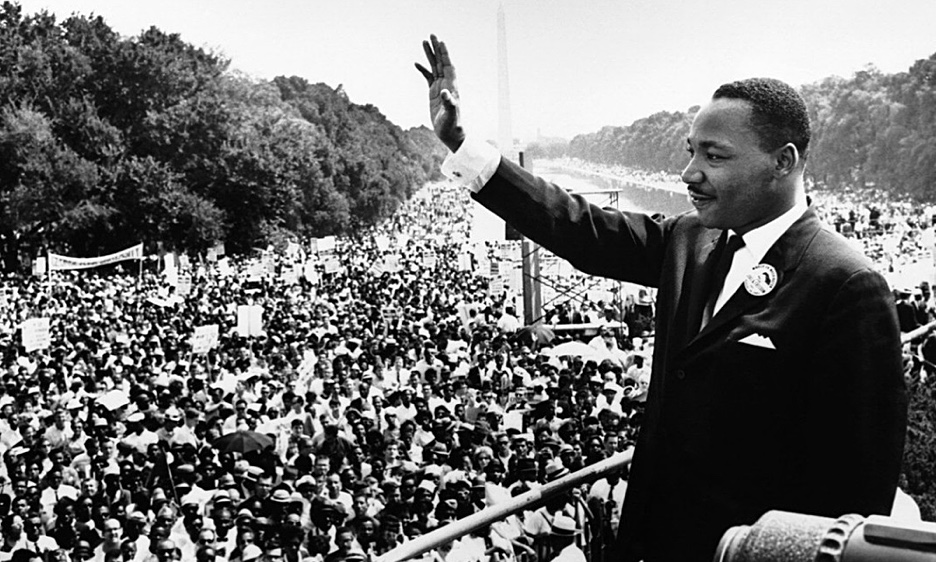 By DOUGLAS GROOTHUIS
April 18, 2020
Sign in to view read count

Jazz speaks for life. The Blues tell the story of life's difficulties, and if you think for a moment, you will realize that they take the hardest realities of life and put them into music, only to come out with some new hope or sense of triumph.... This is triumphant music.
&#151Dr. Martin Luther King, Jr

Without jazz, there may have been no "I Have a Dream" speech by Martin Luther King Jr. Delivered at the August 28, 1963 March on Washington for Jobs and Freedom, this historic oratory is most known for improvisation—a skill without which there is no jazz—that was not found in his original written text. Moreover, the very spirit of the civil rights movement owes much to jazz, as Dr. King himself said, as we will find.

Mahalia Jackson was standing in the throng near King during the speech. Renowned as the Queen of Gospel, this celebrated gospel singer was a good friend to King and a key figure in the civil rights movement. In 1961, she was the first gospel singer to win a Grammy and was instrumental in bringing gospel music to a larger audience outside the black church. She was no foreigner to the world of jazz, having recorded "Come Sunday" with Duke Ellington

A few minutes into the speech, Mahalia Jackson called out to Dr. King, "Tell them about the dream, Martin! Tell them about the dream!" In good call-and-response style (which influenced jazz), the preacher departed from his eloquent prepared text, pushed his notes side, and looked straight at the 250,000 people gathered before him. He then began to speak of "his dream." He remained eloquent, but this words burned with the fires of experience, indignation, and hope. Here are a few of his ringing words.

"I say to you today, my friends, so even though we face the difficulties of today and tomorrow, I still have a dream. It is a dream deeply rooted in the American dream.

I have a dream that one day this nation will rise up and live out the true meaning of its creed: "We hold these truths to be self-evident: that all men are created equal."

I have a dream that my four little children will one day live in a nation where they will not be judged by the color of their skin but by the content of their character.

I have a dream today.

I have a dream that one day, down in Alabama, with its vicious racists, with its governor having his lips dripping with the words of interposition and nullification; one day right there in Alabama, little black boys and black girls will be able to join hands with little white boys and white girls as sisters and brothers.

In the last paragraph, Dr. King breaks into a biblical text that speaks of God's revelation of this righteousness before the nations, which is taken from Isaiah, chapter forty, in the Old Testament. Remember, all this was improvised and not in his notes. Dr. King had, however, used these themes in previous speeches. He had a lot of chops to draw from, and jazz had a lot to do with it.

Jazz roots go deep into American culture and into the African-American community on many levels. While jazz has multi-ethnic origins—and the origins of jazz is a vexed and contested topic—it is safe to wager that no ethnic group contributed so much and so early on as African Americans. Louis Armstrong and Duke Ellington are but two models. Their gifts as performers, composers, and bandleaders also contributed to the dignifying of African-American identity in American culture. A jazz virtuoso was and is no mere minstrel, but an individual to be taken seriously as an artist in his or her own right.

Dr. King saw the connection between jazz and his dream, and he drew on this grand tradition during his "I have a Dream" speech. Consider his opening address to the 1964 Berlin Jazz Festival.

"God has wrought many things out of oppression. He has endowed his creatures with the capacity to create—and from this capacity has flowed the sweet songs of sorrow and joy that have allowed man to cope with his environment and many different situations.

Jazz speaks for life. The Blues tell the story of life's difficulties, and if you think for a moment, you will realize that they take the hardest realities of life and put them into music, only to come out with some new hope or sense of triumph.

This is triumphant music. Modern jazz has continued in this tradition, singing the songs of a more complicated urban existence. When life itself offers no order and meaning, the musician creates an order and meaning from the sounds of the earth which flow through his instrument.

It is no wonder that so much of the search for identity among American Negroes was championed by Jazz musicians. Long before the modern essayists and scholars wrote of racial identity as a problem for a multiracial world, musicians were returning to their roots to affirm that which was stirring within their souls.

Much of the power of our Freedom Movement in the United States has come from this music. It has strengthened us with its sweet rhythms when courage began to fail. It has calmed us with its rich harmonies when spirits were down."

As a gift from the Creator, the creativity of jazz helped ground and preserve the African American identity and quest for justice through its distinctive spirit and sound. Although Dr. King did not mention improvisation overtly in this address, it is the life blood of jazz. Much of the creativity of jazz comes from the freedom-within-form-performed-in-community that is jazz improvisation. And it was that spirit, prompted by a musician (Mahalia Jackson), that led Dr. King to utter his historic words.

He finished his address to the Berlin Jazz Festival with these words of hope.

In music, especially this broad category called Jazz, there is a stepping stone towards all of these."

If jazz is a kind gift of a good God for human betterment, then exporting jazz may be a "stepping stone" for meaning, love, happiness, and faith. May that dream live on—and be realized in God's good time.