By Marc Davis
December 5, 2016
Sign in to view read count 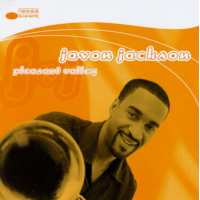 If the iconic sound of Blue Note Records could be summed up in just one band, it would surely be Art Blakey and the Jazz Messengers. For 35 years—1955 to 1990—the Messengers were the heart and soul of hard bop, on Blue Note and other labels.

But what happened when Blakey died in 1990? Where did the music and the musicians go after that? For decades, Blakey trained a Who's Who of young jazz royalty. Many became legends. Others were barely heard from again.

Tenor saxman Javon Jackson was in the very last Jazz Messengers band. He played with Blakey on a handful of records from 1987 to 1990. A few years later, he signed on as a Blue Note leader for five albums of his own from 1994 to 1999.

Where did Blakey's music go after his death? Listen to Javon Jackson. While carrying on some of the hard bop tradition, Jackson continues to blaze his own path. His last Blue Note album, Pleasant Valley in 1999, is a terrific place to catch Jackson trying out a variety of post-Jazz Messengers styles—funk, soul, fusion, tender ballads and even a touch of free jazz.

The album starts unexpectedly with a gentle ballad, Duke Ellington's little-known "Sun Swept Sunday" from 1959's Anatomy of a Murder. (The occasion was the 100th anniversary of Ellington's birth.) But just when you think the short, wistful tune is all daisies and sunshine, it breaks apart into a swirling, surrealistic ending verging on fusion.

It's a good lead-in to the title tune, "Pleasant Valley," a Jackson original that starts funky, then borrows heavily from Miles Davis' Bitches Brew, with fusion stylings and a psychedelic guitar. The final tune, another Jackson original called "For One Who Knows," uses the same fusion vibe, with guitarist Dave Stryker sounding very much like vintage John McLaughlin.

Much of Pleasant Valley has a soul-funk feel. There's a pretty straight-ahead take on Stevie Wonder's "Don't You Worry 'Bout a Thing" and another on Al Green's soul masterpiece "Love and Happiness," a git-down, greasy 1960s homage to the days of Jimmy Smith's great organ-guitar-sax combos.

There's a gentle, sinuous blues original, "Brother G," with a Spanish guitar bit, and a funky organ tune, "Jim Jam," written and performed by Larry Goldings, who otherwise stays in the background on many of the album. All in all, Pleasant Valley is beyond pleasant. It's an exhilarating exploration of styles and genres—something Jackson continues to this day. (I recently saw him in concert with a traditional bop band in Norfolk, Virginia. He was outstanding.)

I can't say what happened to all of Art Blakey's alumni—who can?—but if you like variety in a post-bop sound, Pleasant Valley is a good place to start. And it's a good place to begin listening to a modern-day saxman with a genuine claim to jazz history.