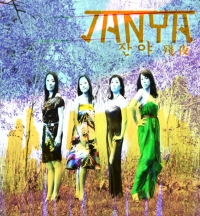 The name "Janya" can loosely be translated "genesis" or "beginning." In Sanskrit, it means "to be born" and in the Korean vernacular, "around dawn." Janya is both the ensemble name and debut recording title of four young Korean and Korean-American musicians attempting to cast Korean shamanic music in more modern terms than it was conceived. Korea appears to be one of the only countries where shamanism was practiced as a state religion. As a result, shamanic ritual and music in Korea have developed more elaborately than in other shamanic cultures. Korean contemporary nationalism has emerged along with a strong and sustained state intervention to preserve artistic traditions.

Janya's music speaks of communion with the Divine, however defined. It is seminal and fecund, humid with birth and catharsis. "Epilogue" is a complex of rhythms and temperaments jettisoned by Lola Danza's at once soaring cry and plaintive whisper, punctuated by Eun Sun Jung's plucked gayageum. "No Escape" adds Seungmin Cha's whispering and panting daegeum, a bamboo wind instrument instrument whose sound is akin to that of a didgeridoo.

Collectively, what this amounts to is the World Music equivalent of free jazz without the chaos. This is emotive and spiritual music of praise, recognition and gratitude, rendered in a hyper-organic fashion. The listening experience is not as foreign as it could be. Whether an expert on shamanic ritual or not, this music can be recognized for what it is: a tradition being carried forward and therefore preserved. We are nothing if we know not from where we come.