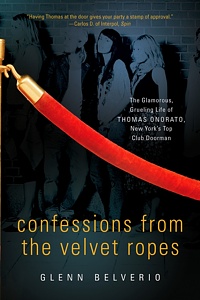 The jazz club was closed during the holidays. Being ever diligent, The Doorman used the time off to reflect on his craft and create a new set of resolutions for the year having accomplished the majority of the goals I had set for the past year. My 2011 resolutions, which were handwritten with a gold-nib Lamy fountain pen on a sheet of cotton-fiber ivory paper secured from Crane & Co., are gold-framed and hang prominently in my private quarters. Yes, The Doorman is ..."among millions—from the eminent to the ordinary, from heads of state to heads of households, from European monarchs to Hollywood royalty—who have relied on the fine 100 percent cotton stationery made by Crane & Co. to help shape their place in history." Thus, 2011 professional proclamations have been replaced with slightly more rigorous 2012 resolutions—The Doorman is committed to improvement. To edify myself on my craft, I used my free time wisely. I read "Confessions from the Velvet Ropes: The glamorous and grueling life of Thomas Onorato, New York's top club doorman," which was a gracious gift from an admirer. Although Mr. Onorato caters to the jazzed-up Paris and Nicky Hilton "beautiful people," I am more fortunate to be serving the truly beautiful jazz-lovers who visit the club where I am simply known as The Doorman. I am ready for 2012.

As we enter a new year, The Doorman has a renewed resolve to ensure the jazz club patrons are welcomed into the sacred space of jazz. There is magic in the performance and the music that more need to experience. Yet, I feel a responsibility as The Doorman to usher in the true believers and bar the obstinate. In the past, I believed in conversions... thinking if the reluctant would enter and experience a few songs that they would receive the holy beam of jazz belief. No more. The conversion rate is so small compared to the disruption of the mellow aura created in the club. My approach will be: "It's a five dollar cover and if that's not agreeable to you, I need to ask you to please step outside, since there are strict fire code regulations about keeping the entranceway clear." Fortunately tonight, with the large crowd we had, there were no issues requiring my new vigor in doormanship. The crowd was terrific and brought a smile to my stoic phiz as I appreciated the power of jazz as an ethnic melting pot. In our nearly full club, we had a delightful mix of black, white, brown, and yellow...all seated within arm's reach of each other. Our act tonight is a powerful female jazz singer accompanied by a legendary pianist. There were only a few songs they performed that begged for a bass or percussion to fill in apparent holes. On one memorable song, the singer's brother jumped on stage and played his tenor. The reaction of the crowd showed that the saxman could have played more than one song with them. The club is clearly acoustically suited for horns. This is a great start to a new year.

As I entered the club tonight, I heard the Al Kooper, Mike Bloomfield, Stephen Stills 1968 recording, Super Session, playing on the sound system. Tonight would be a blues night. As the blues band was setting things up, I talked with the guitarist who made the universal pointing-to-the-sky sign to indicate the music playing. "I love this album and listened to it all through college until a roommate traded it for a pizza... the f**ker." I commiserated, since Super Session is one of my desert island picks (you're stranded on a desert island for the rest of your life and can have only five albums). He went on to say, "I'm Jewish, so I really like Bloomfield since there aren't many Jewish blues guitarists." In addition to the Jewish guitarist (who sounded every bit as good as his hero, Mike Bloomfield), there was the band leader on drums, a Bigfoot-size bassist with a huge-ass (note: official technical term) 5-string electric bass, a wild and dramatically-energetic synthesizer keyboarder, and a piano keyboard player wearing a white shirt with a pattern of multi-color dollar signs screen-printed on it. We had a nice crowd that filled the club and included an ADD-hyper woman who when she wasn't eating her boyfriend's face would jump up and dance. I tried not to look at her because if my head was oriented anywhere in her direction, she would lock eyes and dance in front of me. I don't know if she wanted me to dance with her or what—I am The Doorman, I do not dance. The madness peaked when the band did its blues version of the Stones' Miss You and she with her anorexic skinny body and blues-beaten face did her best interpretation of Mick Jagger. With eyes squinted I could claim to say Mick was in our club.

In a Station of the Metro

The apparition of these faces in the crowd;

Petals on a wet, black bough.

The flow of people into the jazz club was apparitional. It was a blur of faces that all melted together into soft-edge petals. They all seem pleasant and good looking. As The Doorman, I am learning how to read people. A woman tonight reaffirmed something I've discovered: people receive so little positive feedback. We tromp around in the world doing our best, but rarely receive an attaboy or attagirl. As The Doorman, I try to find the balance or pivot point between a compliment and creepy. It's difficult since there's only so much room within the context of my relation to customers entering the jazz club. We had a woman clearly in the 30's to 40's age bracket. When she saw me there ready to screen and collect covers, she said: "Oh! You're not checking IDs—I think if you asked to see mine, I'd probably kiss you!" My response: "I'm not fishing for a kiss, but you do look awfully young, so yes...I need to see your ID." She knew that I knew differently, but in these 15 seconds I reaffirmed what she hopes... that she looks younger than she really is. As I gave her driver's license back, I sealed the deal by saying: "Nice fake ID—be careful, not everyone will let you slide by like I did."

Cold and snow is predictable, yet when it happens there are many in our locale that adopt an Armageddon attitude. I guess they hunker down in their homes waiting for Christ to show up on a snowmobile hell bent (ooops, heaven bent?) to take on Satan for the final showdown. The club was slow. Among the hardy 15 or so who were enjoying the jazz quartet was a couple who had come to the club last weekend—a dark-haired guy and an attractive blonde. The young woman, while gently brushing her sunshine-color hair aside, said she thinks of jazz when the weather is cold. "Nothing better than being in a jazz club on a cold, snowy night," she said. I said, I understand... it's like listening to an original instruments, all string ensemble rendition of the Brandenburg Concertos on a rainy day. Her cute face puzzled and she responded, "I guess so." I left her to ponder and returned to my post at the door. The mournful sound of the alto clearly defined the quartet's version of Coltrane's Equinox as I welcomed a couple of shivering, snow-wet guests. The young man in the pair is a singer, who was given an opportunity to sing a couple of songs with the band. He wore a retro-vintage white belt and matching white shoes, which was amusing. His voice, phrasing, and presentation needs polishing, but it was generous of the quartet to give him a shot. He'll get there... in due time.

We had a jazz quartet tonight that I had been looking forward to hearing. Jazz guitar, drums, Hammond organ, and tenor sax. No bass. I'm accustomed to seeing a big-honking stand-up on the stage and holding the beat with its heavy-raindrop plumping sound. But it wasn't missed. The group sounded great. I complimented the guitarist leader during a break, telling him that he's the "epitome of cool." He was taken aback a bit and said, "I've been called a lot of things, but 'cool' has never been among them. In fact, when I was younger, I was the kid getting the wedgie." I said, "Your y-front is safe here, because you're definitely cool." The crowd tonight was modest sized. Among them was a lone wolf who sniffed out the one lone woman in the club. He was a friendly, mostly earnest, chatty guy who seemed to really like the club and the music. By the end of the night, he was very close to being irritating. There was another couple—not the wolf and wolfette I've been describing—that were seated in one of the three known Vortexes of Love in the club. The Vortexes of Love are cosmic anomalies where couples who are seated in them are pheromonal-driven to engage in PDA (public display of affection). There are three locations in the club where the magic occurs. This couple was seated in the weakest of the three locations, which is weaker by virtue of the fact that it encompasses a greater span than the other two locations, which are clearly two-seat concentrated vortexes. At some point, with greater observation, it may become clear if we have two overlapping vortexes or maybe it's a zone. I'll keep you posted. But for this night, when an out-of-town sit-in tenor was engaged in a Kansas City-style "dual to death" blow off with the quartet's tenor, their frenetic saxophone interchange became the sound track for the Vortex couple's passionate eating-face PDA.

The bassist growls. When he plays his stand-up, he scats with the notes. Very jazzy. Quintessential. His playing perfectly matched the 82-year-old jazz guy sitting at the bar wearing a black beret and sipping Cabernet. With his handsome, lined face, the old jazz dude could be the poster-child for the club. Jazz does soften hard edges. As The Doorman, I see the difference between the faces of people when they walk in and when they leave. The cynic would say: "Yep, that's what alcohol does." But, the jazz club clientele is not of the drink 'till you sink ilk. The music is the magic. Harsh street faces soften and worry lines are Botoxed away with a little Sonny, Miles, and Monk. Case in point: A pleasant-looking woman had entered the club and joined two other middle-aged friends. She joined her friends late and left them early—sure sign of an active, involved person... my kind, one of my peeps. As she left, I said: "Leaving us early..." Her softened jazz face changed back to the intensity of her life as she exited while saying, "Yes, I've got commitments." I thought, yes... commitments.

Doorman at a Milwaukee jazz club and author of The Doorman's Diary at electricdaybook.com.