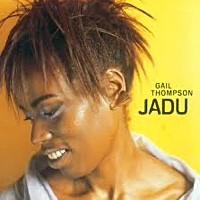 Gail Thompson, a rising young star on the British Jazz scene, founded the Jazz Africa Project about a dozen years ago. From that initiative came the Jazz Africa All Nations Big Band, which has been delighting audiences all over Great Britain ever since. The ensemble gained further recognition at the 1995 Duisburg “Viva la Black!” Festival and ’97 Berlin Jazz Festival before Thompson undertook a visit to the Australian outback, which served as the inspiration for the band’s second album on enja (the first, Jazz Africa, documenting its performance at Duisburg, was released in 1996). Jadu (not an exotic African or Australian name but an acronym meaning “Jazz Africa Down Under”) seeks to combine the elements of contemporary Jazz with the sound of the traditional Australian didgeridoo (played here by guest artist Sean Farrenden). While I’m not prepared to gauge the success of that particular ambition, I can say that Thompson is a splendid composer / arranger with excellent rhythmic awareness and an admirable grasp of orchestral shadings. She’s also a pretty good (self)–promoter with no less than six photographs of herself in various poses arrayed within the album’s booklet and tray. But I suppose she’s entitled to blow her own horn, as I understand she once did as a baritone saxophonist with Britain’s foremost young ensemble, the National Youth Jazz Orchestra. Whether Thompson plays on Jadu is anyone’s guess, as she’s not listed among the personnel, there are no baritone solos and it’s all but impossible to detect its presence in the ensemble passages. I’ve a hunch she does, but it’s no more than that. In any event, I’d describe Thompson’s music as cheerfully buoyant, intensely rhythmic and decidedly modern. On Jadu,>/I> she may have launched a new school of contemporary Jazz, “Afro–Australian.” Whatever one calls it, the music bristles with good–natured energy and swings hard, as good Jazz should. Its African roots are most prominent on “Mandela,” which uses a combination of busy voices and assertive rhythms to suggest the temper of a South African township. The solos, most of which are taken by trumpeter Colin Graham, tenor saxophonist Michael Coates or alto / soprano Adrian Revell (tenor Louise Elliott is heard on “Mandela,” bassist Mario Castronari on “Coolangata,” guitarist Brian Neill and pianist Mervyn Africa on several tracks), are well–drawn but of lesser import than Thompson’s dynamic charts, which keep the rhythm section on its toes and working hard. To their credit, bassist Castronari, drummer Sean Randle and percussionist Joe Legwabe rise to meet every challenge, and are especially persuasive on the quartet of flat–out cookers — “Sydney,” “Coolangata,” “Cairns for Courtney” and “Mandela.” The horns are also impressive, whether in tandem or unchaperoned. If you dig modern big–band Jazz with the emphasis squarely on modern, perhaps you should “get down” (under, that is) and check out Gail Thompson’s ultra–hip Jazz Africa All Nations Big Band.