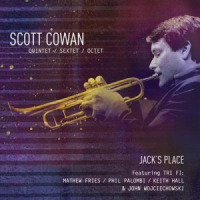 Trumpeter Scott Cowan built his strength performing with several top-notch musicians, including pianist Fred Hersch, trumpeter Kenny Wheeler and guitarist Kenny Burrell, in addition to being an educator and a conductor and arranger. He makes an ambitious move on his debut as a leader by extending his core unit of a quartet into a quintet, sextet and octet. The basic configuration makes for some warm and cozy listening, with the expanded groups showing not only his compositional skill but also his gift for arrangement. The music flows coherently, made stronger by individual attributes and the interplay between the musicians.

The quartet finds a deep groove, on "A Little Blues For A Little One," that unfurls rather lazily. The mood captures the moment and is elevated by pianist Matthew Fries, who is eloquent, and lets space have as much acknowledgment in developing the theme as his succinct notes, which contrast with Cowan's blistering tempest of shards. The juxtaposition of approaches is organic and edgy.

In contrast, Cowan is beautifully modulated, with every note oozing warm emotion into the melody, on the lovely, captivating ballad, "My Elizabeth." His expansion of the theme is assured as he stays within the confines of good taste, never letting the boundaries blister unbecomingly.

Cowan pulls in tenor saxophonist Ben Schmidt-Swartz to swing with the quartet on "Jack's Place." The snappy atmosphere is lit by Fries and abetted by Keith Hall's lithe drumming. Schmidt-Swartz is full-bodied as he dives into a well of ideas before Cowan comes in and forges his own vein of inspired grooves.

"Narnian Knight" is an expansive composition that uses the octet to great effect. The ensemble is rich in harmony and takes the Latin-themed song through its changes with aplomb. The soloists are cogent in priming angular motifs, and add pith to the development.

Cowan proves that he is an assured composer and an imaginative player. In tandem with his outfits, he makes Jack's Place one well worth visiting.