By DAN MCCLENAGHAN
August 25, 2003
Sign in to view read count 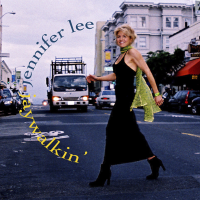 Listen. What grabs you about Jennifer Lee's artistic approach is her self-assured genuineness. The vocalist's debut CD, J-Walkin' leaves a strong impression of lack of pretense—what you're hearing is the real Jennifer Lee. And in a female jazz vocalist in a field packed with talent, Ms. Lee is the real thing.

Her complete vocal control is part of her appeal; a control that doesn't lend a constrainted or stiff feeling to her music, but rather gives it the firm clarity of someone who knows exactly what they're doing.

Lee's take on the under-recorded classic "I'm Old Fashioned" is a perfect example, and is perhaps the set's loveliest offering. Lee gives it a spare arrangement and slows the melody down, turns the tune towards deep introspection, with a sound that is remarkable for the crystalline clarity of her vocals juxtaposed with the sweet wheezing sighs of Rich Kuhn's accordion.

The rhythm section remains the same throughout—Peter Sprague on guitar, Bob Magnussen, bass, Tommy Aros, percussion. Sprague is a San Diego area jazz mainstay who has played with Chick Corea, Billy Mays and Al Jarreau; and Magnusson, with his big, resonant, rubbery sound, has done bass chores for the likes of Sarah Vaughn, Bud Shank, Hank Jones, and Art Pepper. The arrangements on J-Walkin' are credited to Lee and gutarist Sprague, but considering this is the vocalist's debut, one has to suspect the veteran Sprague's contribution is considerable—he also recorded and mixed the CD.

The title tune, written by Peter Sprague, has a measured, jaunty spring in its step; and on Jobim's "Chega de Saudade" Jennifer Lee shows us she can handle a Portuguese lyric with aplomb. Throw in the classics "Blue Skies" (sounding very danceable with the bounce Magnusson and Aros give it) and "Night and Day," a poignant Lee-penned tribute, "Note to My Niece," and even a spoken word "Inchworm Rap" tacked on to the classic "The Inchworm."

In addition you have superb sound quality (like they're in the room with you), top notch accompanists, and ultimately, the finest vocal debut of the year thus far, big label or small.

Visit Jennifer Lee on the web at www.jennifer-lee.net