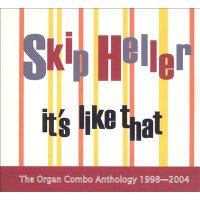 The hyper-eclectic Skip Heller has most recently been attending the often-abused genre of guitar-organ jazz. The guitarist's most recent recordings, Fake Book , Battle in Seattle , and Homegoing were all devoted to this time-tested format, and in each case Heller revealed some element not otherwise considered when thinking of Hammond B3-driven jazz. It's Like That is an anthology containing music from these three discs, plus Career Suicide, Couch, Los Angeles, and previously unreleased live and studio cuts. The opening tune, the previously unreleased "Big J Shuffle," demonstrates Heller's sharp sense of humor and style, a trend continued through the Heller originals, "Jelly" (a beautifully wild and wooly vamp), the ballad "Dave Alvin," and the jump blues "Andy Tesso."

Like his East Coast cohort, Uri Caine, Mr. Heller has a Hebraic streak he likes to indulge in his music. This is brilliantly evident in his original "Meydele" and the Funeral March from Mahler's Fifth Symphony, both from Homegoing. Heller injects this music with joy and intelligence, making the listening experience a bit like witnessing genius by lightening strike, fast and furious and allowing for revelation in future listening. The Mahler piece, rearranged by Heller, may be the crowning achievement to date for the guitarist. The piece swings in a dozen time signatures and rhythms, across genres, and back again.

The unreleased tracks are the most fun, revealing more of the multifaceted Heller. His cover of Norah Jones' "I Don't Know Why" is understated and charming, while his rave-up of Charles Earland's "The Mighty Burner" cooks with pots on, gas on high. Heller's blues sensibility uniquely authentic, as demonstrated by "The Yodel" and "Emiko." The best tunes on the recording belongs to Heller's previous release, Fake Book, but do not let this keep you from buying this disc. The unreleased music is worth the price.

Visit Skip Heller on the web.