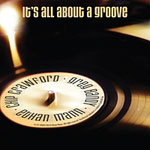 It's All About a Groove is all about three self-effacing musicians having a fine time playing some music that burns with a cold fire, and swinging, sometimes with a fair gusto. Most of all this date is about uncomplicated, yet attractive improvisation, as a group that rarely veers far from the melody, but ventures far enough to create the right kind of buzz. Ethan Mann is a guitarist who has a lot to say in a voice that is uncompromisingly his own. But he prefers brevity to the filigreed approach, and makes statements innovatively, but succinctly. His harmonic conception relies on depth of color rather than myriad shades, and with restrained brush strokes he is able to generate a greater buzz than expected. His single note approach with some bent notes and a whisper of tremolo appears to suit the more heavy hand of Chip Crawford on the Hammond B3.

Crawford can swing with the best and while he eschews the virtuoso playing style of Jimmy Smith and Lonnie Smith, he also comes from a deeply spiritual background albeit with a lighter touch, somewhat reminiscent of Papa Joe DeFrancesco. His solo on "Stop, Look, Listen to Your Heart" best describes the fluent style, light of touch and with nuanced expression that Crawford applies with suave grace throughout the album. Of course, drummer, Greg Bandy has the funk and the groove that is the glue which holds this small unit together. It is no coincidence, then, that a phrase from the vocal on his "Woman Please" comes to characterize the entire album, as he sings how he came to write the piece in question. Bandy is an old soul who plays with fire and a great deal of dexterity. He plays with the deep sense of appealing to the rhythm of the saints, tapping out a swinging litany that accompanies his urgent prayer and sermon that he appears to preach in "Woman Please."

It's All About a Groove is one of those rare records that comes straight from—and aiming its musical missives straight at—the heart. This in itself is very rare in a day and age full of posturing and trying to be something that one is not. Three cheers for the blue notes and blue color blues here.