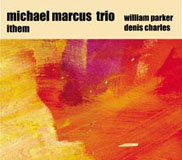 Recorded in '93 but only recently released, this encapsulated treat has the trio of Michael Marcus on alto sax and bass clarinet, William Parker on bass, and Denis Charles on drums performing three live tunes at the Old Knitting Factory in New York City, as well as two studio tracks. The live tunes, "Ithem," "Under the Wire," and "Secret Oceans," find Marcus blowing away any inhibitions as he and the trio careen and bounce off each other with imaginative, often powerful ideas.

The last two recorded tunes are also worth a listen, but the live material is clearly the better half on this set. The live take of "Ithem," for example, captures a spontaneous and inspired give-and-take sequence that would have certainly sounded staged if attempted inside the studio. In the live setting, the group's energy surges and falls with greater grace, especially on the mysterious moods of "Under the Wire" and "Secret Oceans." Extra attention should be placed on the insightful support in rhythm placed forth by bassist Parker and drummer Charles. Their work bends but never breaks under Marcus' full-toned explorations.

Ithem (live)/ Under the Wire/ Secret Oceans/ Here At!