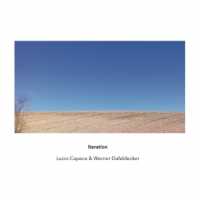 When the Another Timbre label was set up in 2006-7, its releases were intended to be a balance between modern composition and free improv. Over time, that intention shifted gradually so that the majority of the label's more recent releases have been modern composition. Of course, the distinction between composition and improvisation is not watertight, as many modern composers allow performers leeway when interpreting their pieces. This is mentioned here because the two tracks on Iteration are not compositions but the unedited improvised halves of a concert recorded live in Munich in May 2019.

The musicians are both high profile Berlin residents who are vital parts of the city's improvised music scene—Argentine-born Lucio Capece whose primary instruments are slide saxophone or bass clarinet but who has a history of experimenting with other sound sources, acoustic or electronic; and the Vienna-born double bassist Werner Dafeldecker who has been a member of the group Polwechsel since 1993. Although the music was improvised, Dafeldecker comments that it "was maybe 'pre-planned' to some extent, but only in the sense that we share similar interests and a similar history when it comes to content and methodology in improvised music."

The music itself, which runs for just over forty-five minutes, supports Dafeldecker's words. Both halves feature long sustained notes from the bass overlaid with higher frequencies from Capece's use of mini speakers plus long notes from his reeds. The music evolves slowly and logically, with no sudden shifts or surprises. The contributions of the two players sound natural together and complement one another well. Unusually for a concert recording, there is no trace of audience noise, applause or otherwise. Based on the recorded music, the most logical explanation is that all present were totally engaged and rapt—a state which listeners to this recording can expect to emulate. Altogether, convincing evidence in support of improvised music.