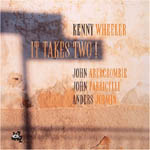 Kenny Wheeler's music may be likened to a waking dream—the cool, ethereal alternative to the incendiary abandon of his peers. There is a strange dichotomy between the wooly, often weird trumpeter who participated in the salad days of European free improvisation and the man who cut It Takes Two!, the veritable embodiment of musical restraint. Much of Wheeler's solo work seems a world away from the bustling sounds of '70s London, favoring a light, airy romanticism and eschewing the strident revolution so imminent to his generation. Always the voice of calm, Wheeler is now far out front—also, strangely, a few too many steps inward.

What results, as it does on this album, is a sort of ambivalence. Wheeler's finely crafted, beautiful music is also strangely detached, as if buoyed in its own separate musical sphere. Limpid, pastoral harmonies, uncluttered rhythms, total ensemble transparency: Wheeler has played in this style for decades and it is simply un-improvable—so expansive that it seems, on the whole, like pure stasis.

In terms of specifics, at least, It Takes Two! is an impressive document. Wheeler's tone is round and pungent, unworn, it seems, by time. Both his technical faculties and phrasing are virtuosic; he remains a compelling and emotionally engaging solo voice. The flugelhorn/twin-guitar/bass formation is new for a Wheeler album, and the sidemen are duly sympathetic. John Abercrombie is fully in tune with the leader's ethos, and his florid, remarkably tasteful legato lines are instrumental toward carrying the group sound. John Parricelli and Anders Jormin are also game—and although often relegated to the background, they are as sensitive a rhythm team as Wheeler has found in a drummer-less quartet.

This band could not fail to deliver fireworks, and it does, in doses. In its entirety, the album's finer points are smoothed into flatness, rendering even the more exhilarating moments—Wheeler is a master of the rubato, Spanish-tinged flugelhorn as hasn't been heard since Sketches of Spain dropped—mere vestiges of thrills.

Here, Wheeler seems caught in an endless waltz. In negotiating both the heady liberties of European free improvisation and the more structured harmonies of swing and bebop-inflected jazz, he has arrived at a confounding middle ground. While it's difficult to wholly dislike music of this quality, I wish I could hear Wheeler reach beyond his means. There is, on this album, at least enough evidence to suggest that he has the legs to escape the void.