Justin Hayford: It All Belongs to You 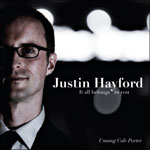 Covers can get old fast. That's especially true when it seems almost every vocalist—from established veterans to relative newcomers—does the same selections from The American Songbook. So it's delightfully refreshing when an artist comes along with musical treasures that aren't so familiar.

Pianist, vocalist and arranger Justin Hayford presents It All Belongs to You, a collection of twelve Cole Porter songs seldom heard this side of yesteryear. It's his third album of vintage songs from some of America's best-known writers. His debut, A Rare Find: Forgotten Gems From the American Songbook (LML, 2001), was ranked among several top ten lists for that year. The follow-up, Look Who's Been Dreaming (LML, 2004), also tapped into several forgotten songs.

Hayford is the son of Charlotte Cain, the youngest of the singing Cain Sisters, who had a Sunday morning radio program on Chicago's WLS. Hayford resisted her influence early on, choosing to pursue a degree in physics at Northwestern University. After obtaining a master's degree in performance studies, he spent several years directing theater, teaching political science at Northwestern and other careers. Hayford eventually began playing piano and singing for friends, which led to another career change.

On It All Belongs to You, Hayford is accompanied by Phil Gratteau on drums and Jim Cox on bass. Performing in the traditional piano bar style, Hayford delivers these selections with verve, not unlike John Pizzarelli or Mel Tormé. He clocks in playfully with the flirtatious "You Irritate Me So, on which he sings of a woman who is the "fly in my ointment and other irritants, but acknowledges that he's in love. The same kind of energy is present on "Come Along With Me.

Hayford and his sidemen blend a bit of Latin style on "Hasta Luego, derived from a little-known film, Something to Shout About, which also featured the Cole Porter hit "You'd Be So Nice to Come Home To. Hayford sings this track as one who is excitedly happy to see his ex depart.

With Jennet Ingle playing the oboe, the album clocks out with the title song. It's an appropriate closer to this mix of ballads and heartbreakers. Hayford delivers a two-edged sword: good music and music that hasn't been covered ad nauseam. The latter fact alone makes It All Belongs to You worth a listen. However, once might not be enough.

You Irritate Me So; Come Along With Me; They All Fall in Love; How Could We Be Wrong; Hasta Luego; At Long Last Love; Easy to Love; Why Don