Maximize your visibility at All About Jazz by upgrading your musician page from standard to premium. With it, you'll receive All About Jazz home page exposure, a highly stylized / ad-free musician page with bonus features and benefits, an ad, plus you control where you sell your music and so much more.
Learn More
54 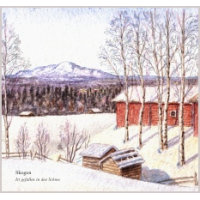 Ist gefallen in den Schnee, lasting sixty-one minutes, consists entirely of a November 2010 recording of the title composition by Magnus Granberg. For the recording Granberg's group Skogen—in which he plays piano—is expanded to a nonet including two non-Swedish guest musicians, Angarad Davies on violin and Toshimaru Nakamura on his instrument of choice, the no-input mixing board. Strings, vibraphone, percussion, bowls and glasses plus electronics complete the group's line-up, giving it a soundscape that extends way beyond that of a chamber group.

Opening with delicate, carefully-spaced piano notes, the composition initially sounds most reminiscent of Morton Feldman. Remarkably, Granberg himself says its rhythmic material and other temporal proportions are derived from two different songs from Schubert's song cycle Die Winterreise (the album title is definitely a line from one of its songs, "Wasserflut"). Its tonal material, however, is derived from a jazz song that he has forgotten. If the composer had not dropped such clues, those sources would not be at all apparent from the music itself.

The piece subtly combines composition and improvisation. Granberg comments, "Perhaps one could say that I provide a potential which could be realized in innumerable ways, but the actual realizations are always the result of what decisions the musicians make throughout the piece; formal differentiation occurs spontaneously as a result of an improvisational process."

With any nine-member ensemble that includes improvisation, there will always be the risk that the players will get in each other's way or that the music degenerates into a series of individual contributions leading to cacophony overall. Granberg's composition deftly manages to sidestep these potential problems, avoiding any feeling of clutter or messiness, while achieving a beautiful sense of space, openness and tranquility. The composer's own piano playing is central to that—his economical contributions set an example to the other players and act as the backbone of the piece.

The ringing sounds of Henrik Olsson's bowls and glasses plus the electronic tones from Nakamura and Petter Wästberg contrast effectively with the ensemble's conventional instruments while being entirely consistent with the mood of the piece and the sound of the rest of the group. Across its duration, Ist gefallen in den Schnee creates its own rules and logic, resulting in a composition that demands to be heard again and again. Sublime.