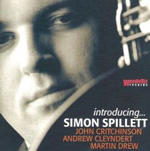 Simon Spillett's debut album clearly marks his preferred territory. Taking his cue from the late Tubby Hayes, he delivers the ten tracks as bold statements of intent and not merely space fillers. Spillett knows his music and has made an intelligent choice balancing barnstormers like the opener "Make Someone Happy with exquisitely sublime ballads "Spring Can Really Hang You Up The Most and "But Beautiful.

Although a long-standing disciple of Hayes, Spillett is no copyist. He's too self-aware to slide down the slope of soundalikes. Realising that no one can ever sound like his idol, what Spillett does do is to carefully reincarnate some of the elements that made Tubby Hayes a true jazz legend.

Interestingly, this is one of the few occasions when the debut album from a young jazz musician is so overtly influenced by a British jazz star, as opposed to the customary American models. Tubby Hayes had covered all the standards on the album and wrote "Off The Wagon, from Mexican Green (Fontana, 1968), which is given a robust ten-minute workout here.

Spillett clearly demonstrates a subtle yet real love of Tubby Hayes with the self-penned "Another Setting, in which the ultimate chord of the theme borrows from the ultimate chord in the bridge of Tubby Hayes' "Dear Johnny B, from Mexican Green. This subtle chordal quoting device is also used to good effect in Spillett's "New Beginning, which is surely also a nod in the direction of British alto saxophonist supremo Peter King (an erstwhile colleague of Hayes), who cut an album for Spotlite of the same name.

In truth there isn't a bad track on Introducing Simon Spillett, and all are memorable. Due to the fiery way in which they are tackled, the more well-known tunes such as "Nobody Else But Me and "Cherokee work surprisingly well and sound fresh. As for the four original tracks by Spillett (the two others being "Gee Cross and "Howdy Doody ), they are of sufficiently high quality as to auger well for his future career. So if this album introduces Simon Spillett, then his followup recording will be certainly unmissable.

Make Someone Happy; Off The Wagon; Spring Can Really Hang You Up The Most; Gee Cross; Another Setting; Nobody Else But Me; But Beautiful; New Beginning; Howdy Doody; Cherokee.