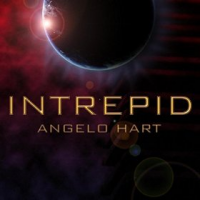 What is most remarkable about pianist Angelo Hart's debut Intrepid is that it clearly demonstrates all of Hart's diverse influences without sounding derivative of any of them. In fact Hart has his own unique style, an uncommon trait for an artist so early in his career.

Energetic percussive playing marks the title track that is made up of intricate and fiery tonal clusters. Thrillingly agile circular lines and dense, brisk chords express intriguing and inventive musical ideas that simultaneously rouse and charm. On "Fallen" Hart demonstrates a definite melodic sense. His tender and melancholic soliloquy is made up of an achingly gorgeous cascade of keys and haunting, vibrant refrains.

Angularity and lyricism exist harmoniously side-by-side on several of Hart's ad lib compositions. On "The Air Above the Mountains," for instance, he utilizes sometimes hesitant other times racing phrases as he explores the entire breadth of his instrument. . Stormy breathtaking acrobatics follow quieter interludes. Hart maintains a sublime balance of provocative innovation and ardent emotion with gentle virtuosity and muscular vigor. He fuses furious spontaneity and delightful dissonance with intense poetry

Hart also peppers his performance with clear nods to various genres. The solemn and contemplative "Dreams of Memories" for example has a western classical streak running through its nocturnesque mood and wistful and somber ambience.

Meanwhile the passionate and arpeggio filled "Big Moment" builds up gradually to a climax in a complex and mystical narrative. Folkish mellifluousness and sweeping symphonic sounds fill this atmospheric and intelligent piece that closes on a quiet and pensive touch.

If this superb record is any indication, Hart has already arrived on the improvisational scene a fully accomplished artist. The album also whets the appetite for more to come from this exciting new voice in creative music.