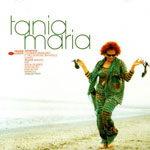 Now in her late 50s, Tania Maria Correa Reis continues to bring all the energy and zip to her performances that she did when she recorded her first album in 1971. 26 albums later, she's still Brazil's queen of the funky jazz samba. Her welcome combination of lively rhythms and sultry ballads brings the versatile program on Intimidade into our hearts from several perspectives. We get uplifting melodies, warm harmony, lively rhythms and a personal look at the artist, still in her prime.

Tania Maria tells us that "Intimidade means opening yourself up to others and conveying your passion to them. She proves her ability to do this beyond the shadow of a doubt through her intimate setting and personal approach. Besame Mucho, always a favorite, comes with plenty of bass/vocal interaction. The singer's interpretation of "Água de Beber symbolizes her unique style with an envelope-pushing blend of piano and voice teamwork.

While the session lacks guest artists who could share in the melody-making, we're treated to an intimate performance that relies on vocal, piano, bass, drums and percussion for its effect. Tania Maria continues to bring us traditional Latin music in her personal style, combining poignant lyrical messages with underlying, moving rhythmic currents.