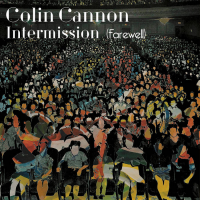 Thank heavens Colin Cannon divided Intermission (Farewell) into three parts because there's so much going on in this recording that it'd almost impossible to review otherwise. Intermission (Farewell) is the young guitarist's fourth recording as a leader. The fact that he's been recording with the same core musicians (bassist Zak Croxall, drummer Tom Hartman, and keyboardist Manami Morita) since 2009 says something. The music on Intermission (Farewell) is so multi-faceted, so detailed and so complex, that its success would almost require some sort of long-term musical relationship. Cannon's compositions are all over the place, stylistically. A good chunk of the album has the sound and feel of classic 1970s fusion and heavy progressive rock. Think Bill Connors-era Return to Forever, or Eric Johnson's original band Electromagnets, or the later version of the Mahavishnu Orchestra with Narada Michael Walden on drums, or even present-day exponents of the fusion sound such as Animals as Leaders. This big sound dominates the passages played by Cannon, Morita, Croxall and Hartman; tunes such as "Mofo," "Still Breathing," "Farewell," and the middle part of "Everyday." However, in addition to the core quartet, there are also guest soloists on reeds, trumpet, and vibes, plus a string section and a vocal chorus. Amidst all of this are a panoply of vocal and found-sound samples. So, as delectable as the fusion stuff is, Cannon is out to fry much bigger fish both musically and conceptually. Yes, Intermission (Farewell) appears to be a good old-fashioned prog-fusion concept album.

Cannon himself seems a little nonplussed as to what the concept is, however. In a brief liner note he says " Like all music, this is just another self-absorbed attempt to make a story out of everything, to make everything seem connected and designed, when in reality maybe nothing is... maybe everything is... I wouldn't know so quit buggin' me." Despite his apparent ambivalence, Cannon weaves a dizzying variety of musical elements into an engaging and quite entertaining recording; one that practically begs for repeated listens. The totality of Intermission (Farewell) is actually closer to Steven Wilson's recent fusion-leaning solo albums such as The Raven That Refused to Sing (and Other Stories) (Kscope, 2013) and Hand. Cannot. Erase. (Kscope, 2015). The vocal-dominated passages ("La Da," "Bugs and Stuff," and the first part of "Recollections") have an oddly folksy, churchy, sing-along character that recall some of Sufjan Stevens' larger-scale non-electronic projects. Shorter instrumentals are more atmospheric, with the found voices, processed choral vocals and the string section providing an ever-shifting background for Cannon's classical-sounding acoustic. Surprisingly, "Colin Goes To Church" is a doom-laden electronic soundscape which resolves into the liturgical "Bugs and Stuff." There's even a goofy sample of actual old-fashioned intermission music that sort of shocks the listener out of whatever dream state Cannon's music might induce.

There's a lot of detail to Intermission (Farewell). It's not the sort of album one listens to casually in the car or at the gym. It's afar better on the home stereo, with one's full attention directed towards it. Even though it starts out unassumingly, with Cannon's lush solo acoustic well out in front, there is a lot going on here; sometimes too much! That said, Intermission (Farewell) is an incredibly powerful artistic statement that firmly cements Cannon and his band mates in the "musicians to watch" category. Bravo!