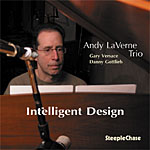 Certainly not your household name by any stretch of the imagination, pianist Andy LaVerne is nonetheless a particularly adept pianist who has worked with many jazz legends over the years including Stan Getz, Frank Sinatra, Michael Brecker and Lionel Hampton. He's also a respected educator and has been largely documented on almost forty dates as a leader for the Danish SteepleChase imprint, including Intelligent Design.

It is an out-of-the-ordinary ensemble that LaVerne assembles for the date at hand, although this particular trio has one previous album under its belt, recorded for another label. In hindsight, it's surprising that the piano and organ format has been so rarely utilized in jazz because it makes so much sense. The B3 is able to provide a bass line and a unique textural counterpoint that can complement as well as step forward. Seeing that Gary Versace is an accomplished pianist as well as a B3 practitioner, he makes the perfect foil for LaVerne because he knows how not to get in the way when Andy's up front and his own improvisations are highly musical statements that transcend the instrument itself.

A unique group make-up or concept itself does not alone make for a great album and, had LaVerne decided to go for standards or a "grits and gravy approach, it might have actually been the downfall for this set. Instead, it's Andy's superb originals that supply the fodder for this most rewarding collection. The lively bop of "Note Worthy possesses a melody that vaguely sounds familiar, but speaks in its own distinct manner. By contrast, a piece like "Tsunami has more of a through-composed flavor to it, floating and brooding with a darker sense of drama. Somewhere in between is the chipper "Upside, a good primer on how important drummer Danny Gottlieb's musical contributions are to the overall success of this venture.

Really one of the most welcomed surprises of the season, Intelligent Design lives up to its name as one of LaVerne's best efforts thus far and one of the finest jazz releases of the year.