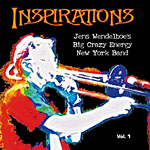 The key word in the name of trombonist Jens Wendelboe's band for Inspirations, "Big Crazy Energy New York Band," is "energy." If there is one thing that there is a surfeit of—and there is much to cheer about here—it is vim and verve. The other unusual and welcome aspect of the record is that it consists of original charts and charts by other composers that are not heard on big band records, avoiding a tendency to tread the tried and tested path of charts played so often as to become overly familiar. Wendelboe's writing—fresh, sparkling with surprises and, well, big crazy energy—is decidedly charming and well suited for large ensembles.

Wendelboe is also not afraid to experiment with sound. Who would have thought a synthesizer could sit comfortably with a trombone? This not only works on "Boone Dog Café," but also sounds like an organ in the ensemble parts—and surprisingly interesting in pianist Bill Heller's solo. The heave-ho from the rest of the cast works quite well in building up the song's tension—the key, in fact, to the success of this record. Every member of the band not only reads with proficiency, but brings a certain charm and excitement in his playing. The trumpets are burnished and brassy, the trombones speech-like and fully exploring the ends of the long tubing, with Wendelboe leading the way.

There is a certain excitement in hearing both the Billy Cobham-penned "Pleasant Pheasant"—a roaring rhythmic chart—and "Dear Old Stockholm," made famous by Stan Getz. Wendelboe's twist to Scott LaFaro magnificent "Gloria's Step" shows him to be bright and full of ideas. "Ear Trumpet," a rather mysterious title, is otherwise a fine ballad, with another interesting synthesizer solo by Heller. Perhaps the best example of Wendelboe's skills as an arranger and ideas man is The The Beatles "A Day in the Life," which is turned inside out by the big band. When The Beatles performed this chart originally in 1967, the band employed an orchestra which played one note, held for an extraordinary length of time; creating the sonic shock at the song's end.

It is no small task to cast a vocalist in a big band because the singer must be able to carry a large cast behind him/her, as well as play a subdued, ensemble role. Tom Lellis was sensational with the Metropole Orchestra on his eponymous 2009 Adventure Music recording; here, Deb Lyons does a fine job on two tracks. For her and a good deal more, this record bears repeated listening, which brings growing enjoyment.