BY WALTER KOLOSKY
November 18, 2002
Sign in to view read count 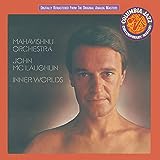 Every McLaughlin album has something to offer, and Inner Worlds is no exception. However, it is easily McLaughlin's weakest outing.

Released in 1976, Inner Worlds features the third and scaled down edition of the Mahavishnu Orchestra. No more strings. No more horns. No more Ponty. Was this album made just to finish the contract out? Who knows? After the exciting Visions Of The Emerald Beyond, this record was a disappointment. So much more had been expected.

Michael Walden on drums, Stu Goldberg on synthesizer and Ralphe Armstrong on bass add their highly capable talents to the mix, and McLaughlin unveiled an early guitar synthesizer on this album to varied results.

The album certainly features some fine music. You just have to search for it. The strong R&B influence present on this record did not go over well with many of McLaughlin’s fans. Perhaps he attempted to make an album he thought would be more accessible. After all, the Mahavishnu Orchestra had often been criticized as being just too serious. Again, who knows?

Without question, the worst tune McLaughlin ever recorded appears on this album. "Miles Out" should be avoided like the plague. We'll just call it an experiment that didn't work. Conversely, check out "Way of the Pilgrim", which is stellar work. Walden penned this piece and much like "Cosmic Strut" which he wrote for Visions - It kicks ass! Inner Worlds also offers some other fine tunes, but extracurricular vocals and a concept looking for an album prove to be its ultimate downfall. Use your CD skip function and enjoy the worthwhile tunes.

All in the Family; Miles Out; In My Life; Gita; Morning Calls; The Way of the Pilgram; River of My Heart; Planetary Citizen; Lotus Feet; Inner Worlds Part 1 and 2