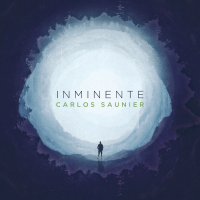 Whenever a guitarist or other instrumentalist releases an album, they always run the risk of being egocentric. The album can often turn into a showcase for their instrumental abilities instead of the songs. Chilean guitarist, Carlos Saunier's debut album Inminente shows what happens when an artist bucks that trend. He offers up six solid original songs, defined by their strong melodies. Saunier's guitar style is reminiscent of Bright Size Life (ECM Records, 1976) era Pat Metheny, with a great balanced mid-range tone.

Saunier throughout the album gives each of his instrumentalist's room to solo, never hogging the album for himself. "Tocino" is a highlight. Starting out with an intro played by Saunier and tenor saxophonist Claudio Rubio, "Tocino" moves into a fast-paced solo by Saunier followed by Rubio's own rapid fire horn lines. Both soloists use space and dynamics well. The song is held together by the duo of bassist Francisco Barahona and drummer Felix Lecaros, who maintain a solid pocket throughout. Four minutes in the song features a radical shift. "Barahona" switches from a fast fusion groove to a slower walking bass line, while Rubio and Saunier restate the melody. Lecaros' drumming is incredible here, featuring great rapid fills to keep the energy high. The bluesy bop-influenced song "Espiritu de la Escelcelera" is another highlight, starting off with a bass intro before Saunier and guest saxophonist Maxi Alarcón play the melody in tandem. After the head, Saunier displays excellent accompaniment skills, playing tasteful melodic phrases and shimmering chords to counter Rubio's lead saxophone voice. Overall this is a solid debut, with good songwriting and solid solos. Hopefully this is a sign of things to come for this young artist.