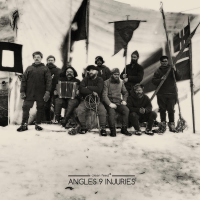 What's to love about this CD is the musicality that's thrown into the maelstrom of styles and attitudes. You've got a hint of early, experimental jazz from the mid-60s with the opening number, "European Boogie" (think Bobby Hutcherson with Eric Dolphy or Archie Shepp, the vibes being paramount); that's until they all start into a kind of Tower of Power incantation. From there, it's a lot of well-mannered, outlandish rummaging, the nonet of Angles 9, led by saxophonist Martin Kuchen, and their "injuries" playing out across seven varied originals.

This music is a rarefied listen to those with a flair for the sound of instruments played well but also played with an eye and ear for semi-organized sound generally painted outside the lines. Injuries is both inside and outside. Angles 9 surprises in part because of the marvelous array of instrumentalists on board, vibraphonist Mattias Stahl a key voice but also Eirik Hegdal joining Kuchen on the rolling, rollicking almost-marching-band entreaty "Eti." Other cast members who surface as vivid musical personalities include trombonist Mats Aleklint, cornetist Goran Kajfes and trumpeter Magnus Broo. Not a straggler among the bunch.

"A Desert on Fire, A Forest /I've Been Lied To" highlights the rhythm section, it's trolling, ruminative cadences come to us almost like a death watch, lovely and mysterious, pianist Alexander Zethson, bassist Johan Berthling and drummer Andreas Werliin plodding along (with vibraphonist Stahl in tow) as the song gradually unfurls with the whole ensemble. It's as if everyone is expressing what it feels like to be lied to.

Broken up into four sections, all arrangements are by the band; a band of merry-makers full of ideas, full of group empathy. Moods change from boisterous to somber, the unpredictability factor combined with top-notch musicianship the calling card.

European Boogie; Eti; A desert on fire, a forest / I've been lied to; Ubabba; In our midst; Injuries; Compartmentalization.