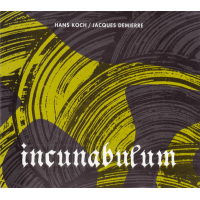 Although their discographies are both liberally sprinkled with duo recordings, this album seems to be the first time that the Swiss pair of reed man Hans Koch and keyboardist Jacques Demierre have recorded together as a duo. Both have been members of Insub Meta Orchestra and, for a period, were simultaneously in the ensemble long enough to be recorded together, on Archive#2 (Insubordinations, 2012). The eight tracks on Incunabulum (for some reason, the title describes any book printed in the early decades of the newly-invented printing press, before 1501) were recorded on two days in May 2018, in the "Le Singe" club in Biel, Switzerland. The longest of the tracks plays for five-and-a-half-minutes, and altogether they just top thirty-six-and-a-half-minutes. Despite that, the concentrated quality of the music more than compensates for the relatively small quantity (which still makes it minutes longer than A Love Supreme, incidentally!) Koch alternates between bass clarinet and soprano saxophone, Demierre between spinet and piano, playing the keyboard or inside. So, with quite a few different combinations of sounds from the players and frequent changes of track, there is plenty of variety and contrast here and never a hint of repetition or playing it safe. Both players sound as if they are pushing at the boundaries of what their instruments can do, discovering new techniques and sounds. In fact, some tracks need to be heard several times to determine who is playing what. For instance, "But I Imagined Him Racing Down The Beach To Dive Into The Surf" (track titles are all taken from David Antin's book I Never Knew What Time It Was) is very lively, with plucked spinet strings, saxophone pad noises and breathy pants overlapping, while the next track "But This Was All Kind Of New to Me" is tranquil and reflective by comparison, being dominated by a slowly-paced piano melody supported by subtle, sustained notes from Koch... before the spell is broken by the full-on "But Things Were Going Pretty Smoothly." Altogether, Incunabulum is a roller-coaster ride of an album, but one which showcases the compatibility of Koch and Demierre, and demonstrates that this pairing has a great future.

But There Were No Words; But We Weren’t Prepared To Enter This Game Of Musical Houses; But I’ve Been Living Here For a Long Time; But I Didn’t Know If I Could Do This; But I Imagined Him Racing Madly Down the Beach To Dive Into the Surf; But This Was All Kind of New To Me; But Things Were Going Pretty Smoothly; But You Know That Even Before You See the Pyramids You’re Going To Take a Camel Ride.