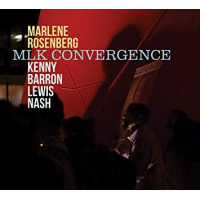 There's MLK, and then there's MLK. In this particular context we're talking about a three-letter acronym referencing the musical union of bassist Marlene Rosenberg, drummer Lewis Nash, and pianist Kenny Barron. And in broader terms those initials obviously point to the late Martin Luther King, Jr. With MLK Convergence the sounds of the former meet up with the outlook and philosophies of the latter, shedding light on societal woes while letting the light and the love in to overshadow the darkness.

Not comfortable standing idly by in these times of trouble, Rosenberg uses this date not only as a chance to make music with two longtime friends and legendary figures, but also as a platform to speak her mind. The grounded and bluesy "American Violet," named after a film about a wrongfully-convicted African-American woman, is the first of many topical tales on the program. "Not The Song I Wanna Sing," with additional bass bolstering from Christian McBride and vocal guest shots from Thomas Burrell and Robert Irving III, delivers some powerful grooves and messages about racial injustice; "The Line Between," exhibiting strength forged through straight time, looks at the divides that separate people while taking inspirational cues from the 1965 marches in Selma, Alabama; "Circle Story," in its waltzing flow, speaks of sad history circling back on itself; and a funky, McBride-enhanced "And Still We Rise" delivers Maya Angelou's message about subjugated people overcoming the circumstances they're facing.

Rosenberg doesn't shy away from addressing problems in any way during this program, yet she refuses to get mired in them. An optimist at heart, she takes many an opportunity to look toward the sunny side. "Togetherness," for example, speaks to a unity of man and a potential positive streak in our times. And Barron's gorgeous "Rain" washes away the despair. Marlene Rosenberg finds the beauty hidden beneath the ugliness of the past and the present, and she does it with supreme grace and style.

American Violet; Togetherness; Not The Song I Wanna Sing; The Line Between; Rain; The Barron; Circle Story; Visions; And Still We Rise; Loves In Need Of Love Today.