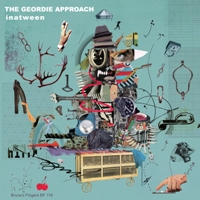 At the risk of pigeonholing The Geordie Approach's music, there's really nothing like a little Noise/skronk/experimental electro/free jazz/pounding post-rock to shake off the cobwebs. The trio's debut album, Why Eye (Bruce's Fingers, 2007) will have deterred the faint hearted with its intense free improvisations, and equally, sucked in more adventurous listeners into the all-enveloping spiral of sound. Inatween picks up where Why Eye left off, blurring the edges of musical genres and raising a standard for collective free improvisation that celebrates textures and layers of sound over virtuosity. In this sense, The Geordie Approach's music perhaps owes less to jazz than it does to other fields of creative music, but whatever the inspiration, there's undoubtedly method in its peculiar madness.

Despite its unreservedly experimental nature there's definite form to these collective improvisations. The gong-like intro to "Iced"' leads into alto saxophonist Petter Frost Fadnes' free-jazz solo over Ståle Birkeland's rumbling drums and a series of repeated guitar chords from Chris Sharkey. Spitting hi-hat anchors the trio as Sharkey veers off into some wild, distortion-heavy impro. At times it's hard to distinguish between guitar and Fadnes' electronic knob twiddling, but the combined effect is unrelentingly intense. The wall of sound gradually dissipates as a slower groove emerges, colored by unearthly effects-altered cries of unidentifiable origin. In the best story-telling tradition, The Geordie Approach adheres to the beginning, middle and end template, even if its music might induce gothic-sci-fi nightmares in the overly sensitive.

The creature-in-the-cellar heavy breathing that introduces "Puck" creates an edgy ambiance, with guitar crying intermittently over a distorted electronic pulse, which echoes forebodingly. Arrhythmic drums stumble about towards the end and resolution comes with an unaccompanied guitar coda. Sharkey's bleeding guitar distortion at the beginning of "Dance Girl Dance" portends another dose of unnerving sound manipulation but before you can say 'mummy I'm scared' Birkeland's pattering brushes forge a groove over undulating waves of guitar/electronic drone that are almost soothingly hypnotic. It's an arresting six minutes that should strike a chord with fans of I Heart Lung's Between Them A Forest Grew, Trackless and Quiet (Sounds Are Active, 2007) and Interoceans (Asthmatic Kitty Records, 2008).

Tribal drums and electronic trance pulses/motifs fuse on "The Candidate"—an arresting marriage of fervor and minimalism. An electronic techno groove intercedes, a voice is given a psychedelic filter, and saxophone and drums go head to head in a heady collective union. "Well, Well Well" explodes with punkish energy. The tumultuous wall of sound is built upon feverishly riffing guitar, tumbling drums and guttural saxophone. A meditative mid-section, all hum and low-key static, is abruptly shaken by altogether harsher static interference and crashing percussive sounds as powerful as a house demolition. "The Homecoming" is slightly sparser, with electronics playing second fiddle to spiraling saxophone, jagged guitar chords and cascading drums.

The industrial intensity of The Geordie Approach's avant-garde impro could appeal to surprisingly diverse niche audiences. Its creative intent—as adventurous as it is challenging—should find favor with fans of alternative music of any stripe.