King Crimson: In the Wake of Poseidon 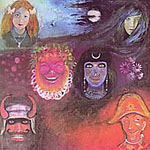 With guitarist Robert Fripp's acquisition of the rights to all past work of King Crimson—including recently discovered original master tapes of the group's first album, the epochal In the Court of the Crimson King—comes a reissue of Crimson's second album, In the Wake of Poseidon. Otherwise identical to the 30th Anniversary Edition that's been out since '02, the reissue now includes the single version of "Cat Food" and its flip side, "Groon."

While that may not seem like reason enough for folks with the '02 release to rush out to hear the latest, it should be. While "Cat Food" is simply an edit of the longer album version, "Groon" points to a more free jazz sensibility that would pervade much of Crimson's next two releases, Lizard and Islands.

Poseidon is a transitional album, with the personnel in complete flux. While Michael Giles plays drums on the album and Greg Lake contributes most of the vocals, both had officially left the band, leaving Fripp and wordsmith/light engineer Peter Sinfield as sole remaining members. When it was first, released many criticized it because the first side so closely resembled the format of In the Court: "Pictures of a City," with its aggressive edge and saxophone/guitar unison salvos, being the new "21st Century Schizoid Man"; the pastoral "Cadence and Cascade" echoing "I Talk to the Wind"; and the title track clearly reminiscent of "Epitaph." But, looking back, such frivolous dismissal clearly missed the point.

There are unassailable similarities, to be sure, but Poseidon also hints of changes in the wind. Fripp is a more dominant voice, and demonstrates an increasingly free style, clearly inspired by Derek Bailey, in the middle section of "Pictures of a City." But the real revelation comes with second side of the album. At the time Fripp may have called "Cat Food" a rock song, but with Tippett providing some outrageously abstract piano over a blues form, and Fripp trading off with Tippett in the solo section, the tune is more exploratory than anything that had come before. The final movement in "The Devil's Triangle" likewise features Tippett in full-out free mode, a cacophonous conclusion to a nightmare-inducing suite that uses Gustav Holst's "Mars" as its starting point but, with its dense layers of mellotrons, ultimately becomes more chaotic and disturbing.

But perhaps most of all, the bonus track, "Groon," points to what is to come. This trio piece for Fripp, drummer Michael Giles, and bassist Peter Giles bears some resemblance to John McLaughlin's debut, Extrapolation, in its combination of idiosyncratic themes and frenetically free-improvisational core.

Crimson would go on to add guest artists from the British jazz scene, including Tippett, cornetist Marc Charig, and trombonist Nick Evans, to subsequent releases, and it would be another year and two recordings before there was a lineup stable enough to tour. But In the Wake of Poseidon provides the link between the more symphonic In the Court and the freer approach of Lizard and Islands.

Visit King Crimson on the web.