Sedric Choukroun: In the Parlor

By Tom Greenland
December 12, 2005
Sign in to view read count 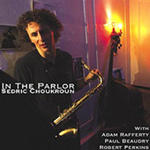 Sedric Choukroun is one of New York's hidden treasures, a soulful man who speaks through his horn with gentle authority. An immigrant of French-Algerian heritage, Choukroun has been a central figure at Marjorie Eliot's intimate Parlor Entertainment, where an extended "family" gathers in her Harlem apartment every Sunday to enjoy a uniquely hospitable concert environment.

In the Parlor is the tenor saxophonist's self-produced maiden voyage, a fine, multifaceted offering showing the breadth of his vision, with tunes that run the gamut from samba to funky soul-jazz to pensive ballads to bop waltzes. The mood overall is tender, unhurried—this is jazz for sipping, not guzzling, like the bottom half of an espresso. Choukroun's breathy tone harks back to the romance of Johnny Hodges and Ben Webster, while his inventive melodic lines echo Sonny Rollins, an influence acknowledged in "Nigeamba, his reworking of "Airegin. There are fine solos throughout—"In the Parlor, "An Afternoon with April, "Le Long de L'eau, and "Where You Come From —that build organically, peppered with unexpected stops and turns to keep listeners engaged.

Choukroun's teammates on this outing create a cohesive group sound: drummer Robert Asare Perkins solidifies each new groove with solid time (listen to his second-line, press roll samba closing the opening track or his outro filigree on "She Shines ); bassist Paul Beaudry has nice moments during "Miles in Paris, "An Afternoon with April, and "Because of Construction ; and a special commendation goes out to guitarist Adam Rafferty for his well-rounded, sensitive accompaniment and fine soloing on "Reverily, "Because of Construction, and "Where You Come From, where he ignites in fiery pyromania.

While the recording doesn't always capture the musicians' sound to best advantage—Choukroun's aspirated attack and Rafferty's extraneous pick-on-string noises seem exaggerated at times—it heralds an important arrival of someone who won't be a stranger for long.

Sunny Sky in Central Park; In the Parlor; Miles in Paris; A La Cool; An Afternoon with April; Nigeamba; Reverily; She Shines; Le Long de L'eau; Where You Come From; Because of Construction; My Friend Bob; Baby Sneeze.