The Ron Eschete Trio: In The Middle 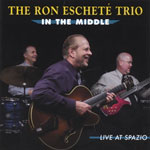 I've been listening to Ron Eschete since the late '70s, but I was surprised to learn that the guitarist has so few albums available (of the thirteen under his own name, only six are still in print). Up to a certain point in time, Eschete was the consummate LA sideman; he has appeared on a gazillion dates and worked with artists like Dave Pike and Gene Harris for long stretches. In the latter case, Eschete joined Harris for the last six years of his recording career and appeared with his quartet on thirteen albums. During the 1990s, Eschete appeared on a multitude of records on Concord. I've never heard him on an album that was less than good.

Ron Eschete is from Houma, Louisiana, a suburb of New Orleans, and he worked the clubs there before graduating from high school. After leaving Loyola, he toured with Buddy Greco, and he decided to relocate to Los Angeles in 1970. As he gathered experience working with the greatest names in jazz, Eschete decided to lead a group in the late 1980s.

This trio date was recorded live at Spazio in September, 2003 with Eschete's current partners: Todd Johnson (six-string electric bass) and Kendall Kay (drums). In The Middle is a very comfortable album to spend some relaxing time with. Ron Eschete appears to be "Kenny Burrell without the celebrity status." Starting with a loping version of Victor Herbert's "Indian Summer," followed by such familiar tunes as "Taking A Chance on Love," "Bye Bye Blackbird" and "Lady Be Good," Eschete burnishes each of these venerable tunes with his lyricism and swing. Only the final tune, the bluesy "Mama's Home Cookin'," is an Eschete original.