King Crimson: In the Court of the Crimson King (Original Master Edition) 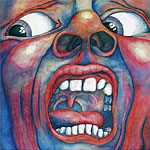 In the liner notes to Against the Clock: The Best of Allan Holdsworth, drummer Bill Bruford said of his mid-'70s work with Holdsworth: "Even from here in the UK, the sound of US guitar players across the pond sitting up and taking notice was deafening." The same could be said about King Crimson's debut album, In the Court of the Crimson King, except it wasn't just guitar players who sat up and took notice. The arrival of King Crimson in '69 was one of those watershed moments in music, where a name for what they were doing simply did not exist.

36 years later, the album is still regarded as one of the most significant albums of any time. The terms "art rock" and "progressive rock" were almost instantaneously born the day it was released, although guitarist Robert Fripp, the only constant in a group that continues to record and tour this day—and, unlike most groups that have lasted this long, is not content to rest on its laurels, instead constantly evolving and never looking back—has been quite clear that neither label is appropriately descriptive.

And so, given that Fripp released a series of 24-bit 30th anniversary remasters of the entire Crimson catalogue beginning in '99, the question is: why yet another remaster, and should we care? While constant sonic reassessment of older recordings often seems to be nothing more than a money-grab, here, like the '97 remaster of Miles Davis' Kind of Blue, there is good reason. In late '03, the original master tapes of In the Court of the Crimson King were discovered in a tape archive. Using these, as opposed to the previously used second- generation masters, along with recent developments in analogue transfer and digital encoding, make this the definitive version.

Fans got a taste of this on last year's box set, The 21st Century Guide to King Crimson, Volume One. Now they can hear Crimson's debut with all nuances restored, and with a cleanliness of sound that is clearly noticeable. Michael Giles' cymbals are crisper and, at times, more delicate; Greg Lake's bass has more oomph; Ian McDonald's mellotron is more robust, his flute richer and his vibes more fragile; and Fripp's various guitars are more present.

As for the music, it continues to defy simple categorization. From the power and chaos of "21st Century Schizoid Man" to the pastoral elegance of "I Talk to the Wind," the album quite simply had no precedence, unless you happened to be one of the few people who actually bought The Cheerful Insanity of Giles, Giles and Fripp when it was first released. And the extended, freely improvised, solo section of "Moonchild" demonstrates the jazzier leanings of Fripp, McDonald, and Giles that contributed to the group's unique complexion.

So, is it worth checking out? Even if you've heard the 30th Anniversary Edition, unequivocally yes. And if you haven't ever heard In the Court of the Crimson King you are, quite simply, missing out on a defining moment in modern music.

Visit King Crimson on the web.