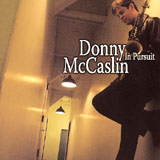 In the follow-up to his critically acclaimed Soar (Sunnyside, 2006), saxophonist Donny McCaslin continues to evolve his interest in blending advanced jazz harmony and improvisation with world music in general, and the rhythms of Latin and South America in particular. But while Soar's core quintet expanded to a nine-piece at times, here it remains intact, with the addition of producer/altoist David Binney creating a consistent sextet that forges an even stronger group identity.

It's also an album composed entirely by McCaslin. All but the opening "A Brief Tale was funded, in part, by Chamber Music America's New Works: Creation and Presentation Program, creating an even stronger musical narrative. All these essentials—a funded compositional opportunity, fixed personnel and the chance to evolve previously introduced interests—make In Pursuit an even better record, with outstanding performances by everyone involved.

"A Brief Tale begins as a tenor/drums/percussion trio, but just past the half-way mark Ben Monder enters with an Afro-tinged guitar pattern that quickly leads to the rest of the group in the pool, with McCaslin's overdubbed tenor creating a rich and compelling sonority that's a definitive characteristic of the entire record. On "Descarga, bassist Scott Colley solos in tandem with percussionist Pernell Saturnino and drummer Antonio Sanchez, before leading into a gentle yet undeniable groove that drives McCaslin and Binney's contrapuntal theme, a blend of saxophones and flutes that's as appealing as it is challenging. McCaslin's tone is robust no matter where he is in the tenor's range and, while he's a passionate soloist, he's driven by internal motivic ideas that create a focused story with every solo.

While the majority of the highly accessible In Pursuit is about fluid ideas combined with muscular weight, there are times when the sextet goes to unexpected places. The title track begins with an idiosyncratic tenor/alto unison theme, but dissolves into a middle section of greater freedom where it's hard to know who—Monder, with his harshly overdriven tone or McCaslin, exploring the entire range of his instrument—is in pursuit of whom.

That this cadre of New York musicians, including everyone here and others like Chris Potter, Adam Rogers and Alex Sipiagin, are creating a larger discography that has a marked aesthetic still distinguishable by the leaders of individual projects is remarkable and with rare precedent. McCaslin and Binney have been working together since the days of their cooperative 1990s group Lan Xang, and when they play in unison here it truly feels like a single voice.

Binney is becoming an increasingly in-demand producer—also co-producing Colley's superb Architect of the Silent Moment (CamJazz, 2007)—and is developing a distinctive voice in that capacity. Still, while his earmarks are all over In Pursuit, it remains undeniably McCaslin's record, evidence of rapidly growing compositional and playing skills that are positioning him as one of his generation's most important tenorists.