By GLENN ASTARITA
August 1, 2001
Sign in to view read count 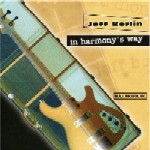 Few would debate electric bassist/clinician, Jeff Berlin’s significance among the post-Jaco soloists in jazz and fusion. With his third solo effort, amid

numerous endeavors with players such as guitarist George Benson, drummer Tony Williams, “The Brecker Brothers”, flutist Herbie Mann and many others of note, the monster bassist summons an all-star cast for his latest jazz-based project.

Essentially, Berlin and associates impart a festive disposition during these largely high-octane works, however the bossa-nova tinged, “Pale Glider” offers little more than a soothing intermission to the often vigorous proceedings as the musicians reenergize their batteries on the “Tower of Power”-like funk/groove piece, “Reggae Ricardo”. Simply stated, In Harmony’s Way is all about groovin’ in the fast lane. Recommended.

This recording is available only at Jeff Berlin

This Is Your Brain On Jazz; Runaway Train; Emerill Kicks It Up; Everybody Knows You When You