Offpiste Gurus: In Case Of Fire 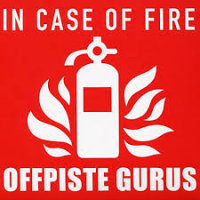 And now, as they say, for something completely different. In Case Of Fire is "Scandinavian Indie-Pop Jazz" for want of any other label, by the group Offpiste Gurus (vocalist/poet/songwriter Trinelise Væring, reedman Fredrik Lundin, bassist Thomas Vang and drummer/percussionist Jeppe Gram).

"Offpiste" literally means skiing purposefully on ungroomed trails, that is off the beaten path, and an extended meaning of broadly doing the unexpected. How this applies here is that the album, which consists of eleven tracks all under five minutes, with most under four minutes, and furthermore these tracks are songs (tunes) but, importantly, with words that matter. That is, not really jazz , not really pop, not just tunes, but something, well, offbeat and unexpected.

All of these songs were written by Væring and Lundin, with arrangements that are sparse, tightly organized, to the point and there solely to support the song via structure and accompaniment. Attention is never pulled away from Væring's voice and the words, even during the short sax interjections. It was not by accident that famed Danish Indie producer Nikolaj Nørland worked on the record and not some jazz-oriented producer.

Væring has a very attractive, clear voice with a light vibrato when it is needed. She clearly enunciates every syllable throughout the melody, making it easy to follow the written lyrics in the liner. The band's accompaniment on any particular tune stays out of her way, but also points back her voice, creating a low-key intensity that is different on each track.

The overall feel produced by these songs is a very sly and sharply focused commentary on modern life, personal interactions and the emotions surrounding plain life. There is a bit of hipness also, with some of the observations coming from that angle. Structurally, these songs are really poems set to music, with common place meter and rhyme avoided for the most part.

As the tracks progress, one is strongly drawn into this very personal world and, in the end, to become a part of it. It is also virtually guaranteed that the tunes will lodge into the mind, not necessarily because of strong hooks, but because they are so finely crafted. Heads will nod at many points in the arrangements, and knowing smiles will spread across faces as the words and music weave their spell.

Not jazz, not pop, more than mere tunes to be immediately forgotten, In Case Of Fire is easily remembered, and fondly so. For that is the point, is it not?

Live, and slightly longer versions (but without an audience) of these tunes can be found here; Offpiste Gurus -Take Five here.

Nickname and Shoe Size; Wouldn't Be the First Time; When Pigs Fly; Accidentally on Purpose; In Case Of Fire; One and Lonely; Are You One of Those Guys?; Big Girl; Trip to the Moon; Submarine; Love Is an Old Toyota.