Birdie Leigh: In A Silky Mood 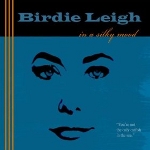 In A Silky Mood is very much a sampler disc, showing off the considerable wares of one Birdie Leigh. The vocalist joins Retta Christie (Retta Christie with David Evans and David Frishberg: Volumes 1 and 2) and Lawrence Lebo ( Lawrence Lebo: Rhythm and Roots) in addressing American Music in a very stripped down fashion. Leigh combines Lebo's sense of humor with Christie's earnest sincerity, for a perfect brew of fun.

"My Baby Just Cares for Me" and "That Old Black Magic" represent Leigh's entry to the great American songbook. Her delivery is highly polished antique, without ever being too reverent. "Cow Cow Boogie" gets into Lebo's Western Swing area, while "So Danco Samba" is Leigh's effective Latin nod. "Someday Baby," a loosely veiled take on Muddy Waters's "Trouble No More," is a layered blues that is almost too processed, but is, nevertheless, very effective. The guitars are thick and sinewy, the horns smoky and swinging.

But it is a different American Songbook, the one originating in Nashville and Austin rather than New York City and Los Angeles. Leigh and her find band transform the Patsy Cline standards "Crazy" and "Walkin' After Midnight," and Bobbie Gentry's "Ode to Billie Joe," into brisk Western Swing that complements "Cow Cow Boogie" very well. Leigh's rich and resonant alto infuses these songs with a dense, sensuous base, fecund and organic. The mood is not necessarily silky, but is, indeed, something else.