By Marcia Hillman
October 6, 2008
Sign in to view read count 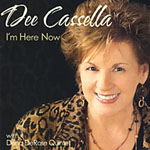 There is some advantage in being a late bloomer. Late bloomers are able to garner more nourishment and life experience. In the case of Dee Cassella this means knowing how to sing a song. Cassella has had several other lifetimes before finally committing to a singing career and her first CD. Backed by Dena DeRose on piano, Jed Levy on sax and flute, Martin Wind on bass, Matt Wilson on drums and Gene Bertoncini on guitar, she sings her way through an even dozen standards that have not been overdone.

Cassella has interesting vocal qualities and (yippie!) great diction. She has a voice that sounds like a little girl at times and a mature woman (which she is) at others. On two of the up-tempo tracks, “Lady Bird” and “East Of The Sun”, she does some nice scatting riffs in unison with DeRose but it is on the ballads that she really gets to show all of the warm shadings of her voice. At her CD release party in August, 2008 at New York's Metropolitan Room (where she performed most of the songs from I’m Here Now) Cassella really shone on the slower numbers both in vocal quality and interpretation, projecting her warm personality.

Notable on both the CD and the live performance was Cassella’s rendition of the Leslie Bricusse song “When I Look In Your Eyes” and Lerner and Lane’s “Too Late Now” (a song originally sung by Jane Powell in the movie Royal Wedding). DeRose does a great job as musical director, arranger and accompanist and Levy’s flute work on “There’s No You” hits the spot. Bertoncini is, as usual, tastefully delicious. Wind speaks well on “Speak Low” and drummer Wilson delivers a steady and conversational drumming performance all the way through.

The personnel on the CD and in person were the same except for Sean Johnson’s able substitution on bass. The live performance captured the intimacy of feeling displayed on the CD and it looks like Dee Cassella will be “here now” and for a while to come.

I'm In Love Again; Lady Bird; Some Time Ago; That Old Feeling; When I Look In Your Eyes; Don't Ask Why; It Could Happen To You; Too Late Now; Speak Low; My Favorite Year; East Of The Sun; There's No You.