Joe Lovano: I'm All For You 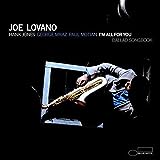 Joe Lovano's I'm All For You is subtitled Ballad Songbook. Every song is taken at a leisurely pace, and the recording reminds me of Charlie Haden's Quartet West album Haunted Heart. All of the renditions are indeed haunting and very soulful. Lovano has collected three of the best to join him—Hank Jones on piano, George Mraz on bass and Paul Motian on drums. The great ones make it look easy.

Half of the 59 minute album is made up of standards. The title track is a fuxture in Lovano's repertoire, based on the easily recognizable chord changes of "Body and Soul." Lovano was member of Woody Herman's orchestra from 1976 to 1979, and as a tribute to Herman and Stan Getz, he has included "Early Autumn." He creates a tone very reminiscent of Getz, yet plays notes that are 100% Lovano. "I Waited For You" was a Dizzy Gillespie piece of the 52nd Street period.

"Like Someone in Love" is a Lovano/Jones duet. "Monk's Mood," taken just a shade slower than the original, is played without Mraz's bass. "Stella By Starlight" is very danceable, with a good swing to its beat. While with Mel Lewis's orchestra, Lovano often played "The Suite for Pop." Its middle section is included here under the title "The Summary."

A big surprise is "Countdown," from John Coltrane's Giant Steps LP. Here it is done at a very leisurely pace, with Jones and Mraz maintaining the tempo while Lovano and Motian briefly employ a rock 'em sock 'em approach.

I'm All For You is a very good album for relaxation. Notwithstanding "Countdown," a single mood of melancholia is created for the entire disc.

Although one mood is sustained throughout, this should be another very popular album for Lovano. It's a winner.