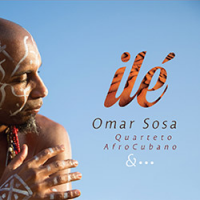 "The word ilé, from the Lucumí tradition of Cuba, means home, earth." That single sentence, which gets the ball rolling for Omar Sosa's self-penned liner notes, says all that needs to be said about this return-to-roots project. Or does it?

Ilé finds Sosa looking back to Camagüey, Cuba. He populates this album with musicians who hail from said locale—drummer Ernesto Simpson, multi-reedist Leandro Saint-Hill, and guests like Eladio "Don Pancho" Terry and Yosvany Terry—but listeners shouldn't be fooled into thinking that this is a tradition-minded trip down memory lane. Sosa may nod toward traditions here and elsewhere in his discography, but he's never been one to be handcuffed by strictures and structures. A broad-minded approach to Latin music, jazz, and world affairs of the aural variety have always positioned Sosa as a sonic spirit guide, not a purveyor of pure traditionalism, and this album furthers that line of thinking.

A signature blend of mysticism, jazz, Afro-Cuban aphorisms, samples, world music(s), and beyond-category sounds is at the heart of this quartet-plus-guests project. There are peppy productions that speak to the Cuban spirit ("Dame La Luz (Give Me Light)"); cabalistic concoctions that combine sampled street noise, a sense of mystery, percussion, flute, guitar, and vocals from spoken word artist Kokayi and Italian singer ZogaroS ("A Love Lost"); calmly flowing pacifiers ("4U"); and flamenco-inflected numbers—pieces that look at old world traditions with a modernist mentality—that feature Jose "El Salao" Martin's vocals ("Mentiras Enemigas (Enemy Lies)"). In addition to those compositions, Sosa peppers "Momento" tracks—improvised pieces featuring samples, his own playing, and the Terrys—throughout the album.

Across this entire journey, Sosa works with the same sense of grace and creativity that informs the best of his work. Some artists make it appear that their music is born through hard labor, but Omar Sosa never gives off that impression. He seems to conjure his music out of thin air. He leaves his hard work out of view, choosing only to show and share magical end products like ilé.