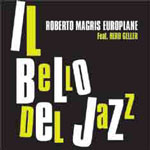 Pianist Roberto Magris leads a stellar mainstream quartet on this album, and guitarist Darko Jurkovic makes it a quintet on "No Sadness, "Parker's Pen, "Deception and "Il Bello del Jazz. Alto saxophonist Herb Geller provides a warm reflection that gives the ensemble a large portion of its lyrical texture. He and Magris come together with a natural love for melodic invention that swings comfortably.

The title track drives with a beautiful texture that proves seamless in its translation and fluid from its inception. Walking bass, anxious, transparent sticking, creative soloing with outside quotes, and a warm musical embrace give the band's interpretation a timeless flavor.

Magris' program includes originals as well as familiar songs. Ballads and light romps give the unit plenty of variety. However, the flowing air of jazz authority that swings this session lightly from start to finish makes for a clear-cut five-star performance, which means an automatic seed on this year's ten best list. When everything fits the way it does for Magris and his ensemble, there's got to be some intuition involved.

Geller, 77, brings a fresh outlook to this affair. His views on what makes mainstream jazz work give the session a solid backbone. However, he and the others temper the tried and true formula with gentle nuances that take the session to another level. With "Key Largo, for example, Geller and Magris push with spontaneity through twists and turns, swinging like a Saturday night at the dance. Geller drives high and low, Magris spins a knuckle-busting flurry of ideas, and the quartet sews this one up with a new overcoat.

Geller's "Deception and "Stray Form flow with lyrical ideas that emphasize a clarion tone and smooth attack. Magris' "No Sadness and his "Parker's Pen bring joyful pleasure to the program in different ways. One nods to the energy of an up-tempo Charlie Parker line, while the other saunters eloquently in a light Latin mood. The program maintains a firm hold on jazz's mainstream tradition while completing the spirit of innovation through intuitive shifts in position.