Andrea Brachfeld: If Not Now, When? 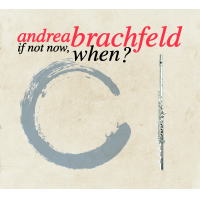 Of all of the necessary tools associated with the creative process, the most overlooked may simply be space to think and grow. While the mile-a-minute, multi-tasking mentality that dominates in modern society makes it difficult to find said breathing room, musicians occasionally need to take a step back to fuel their artistic impulses. Flutist Andrea Brachfeld is well aware of that fact. In 2016, Brachfeld put her writing on the backburner and spent a year focusing on meditation. She came out rejuvenated on the other end, diving into her art with a renewed sense of purpose. If Not Now, When? is the fruit of that experience.

Joined by longtime musical associate and sounding board Bill O'Connell on piano, the esteemed Harvie S on bass, and percussive pillar Jason Tiemann on drums, Brachfeld delivers a set of music that's pure heart and fire. Leading off with the one-two punch of "The Listening Song" and "Steppin,'" she reminds us of the flute's might and majesty in straight-ahead realms. Then, as if to draw attention to the importance of looking inward, she re-centers sound and soul with the ruminative "Creating Space."

The sign of enlightenment painted onto this album's cover carries through to the programming choices and expressions as the album progresses. "The Silence," perhaps something of a misnomer, sings and swings clearly; "Anima Mea," moving with a waltzing gait at its core, is bookended with mournful flute folk tidings hanging above glistening and rumbling rubato foundations; "Movers And Shakers" kicks off with a tightly choreographed head, with the quartet stretching the design fabric of the song as it plays out; and a dose of Coltrane-esque spiritual energy carries "The Opening" through to its closing.

This band finds a way to leverage different strengths on each track, but it also taps into a universal mentality across the entire date. There's an incredibly pliant simpatico driving this music ever higher and deeper. If Not Now, When? is a beautiful example of four beings in tune with one another and fully aware of their own resources and recesses.