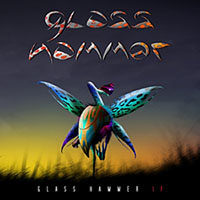 It's strange, perhaps, when a group actually transcends anything its biggest influence has done in decades, but that's exactly what the revamped Glass Hammer has done with If. With only keyboardist Fred Schendel and bassist/keyboardist Steve Babb (founding members, both) remaining after Culture of Ascent (Arion, 2007), If sounds the way Yes should sound four decades later, rather than the tired, creatively stifled group that's been touring its back catalog endlessly—the past couple years with three legacy members joined by the lead singer from a Yes tribute band (Benoit David), and the son (Oliver, admittedly a fine player) of its most heralded keyboardist, Rick Wakeman. It would be easy to criticize Glass Hammer for sounding too much like Yes—especially with new singer Jon Davison a close double to Anderson—but the plain truth is that If is everything today's Yes isn't: energetic, creative...and egoless.

Neither Schendel or Babb could be considered massively innovative, the way any of Yes' glory day alum were, nor could recent recruits Alan Shikoh (guitar) and Randall Williams (drums) be considered groundbreakers like Yes guitarist Steve Howe or drummer Bill Bruford. What they are, however—in contrast to the tired, overblown anachronism of Yes 2011—is committed. If's four episodic epics (in the nine to 24-minute range) and two shorter pieces possess so many stylistic markers from 1970-'72 Yes—from Babb's punchy bass lines and analogue synth work, and Schendel's organ and mellotron, to Shikoh's tart guitar and electric sitar lines—that it suggests how Yes might have evolved, had it avoided the massive egos and creative missteps that have created a revolving door of legacy members.

Instrumentally, Glass Hammer is better balanced between its members, with room for everyone to shine and none of the sense of competition that began to invade Yes by the time of its flawed but occasionally brilliant Tales from Topographic Oceans (Atlantic, 1973). Instead, these six original tracks—built around Davison's spiritual lyrics, instrumental movements ranging from propulsive, irregularly metered grooves to ethereal atmospherics, and hard-driving solo segments that still retain some of Schendel's allegiance to Emerson, Lake & Palmer's Keith Emerson—are thoroughly compelling, and, even if reverential beyond all reason, somehow fresh and new.

If this review appears to wax heavily on Glass Hammer's similarities to Yes, it's only because they're impossible to ignore, right down to its use of rhythmic vocal harmony. But if it's possible for an homage to supersede its source—at least its source as it is today—then If does exactly that. It may not be Yes but, based on YouTube videos from the progressive rock superstar's latest tour, that's just as well. Instead, If is like a Yes album from an alternate universe, where internal strife and external expectations aren't a hindrance—allowing the group, instead, to continue on where it left off around the time of Close to the Edge (Atlantic, 1972) and Tales from Topographic Oceans . With a new Yes album on the horizon, it's still likely that If will be the one to reach for, when the jones hits.

Beyond, Within; Behold, The Ziddle; Grace the Skies; At Last We Are; If the Stars; If the Sun.