Zu & Nobukazu Takemura: Identification With The Enemy: A Key To The Underworld

By Troy Collins
February 23, 2007
Sign in to view read count 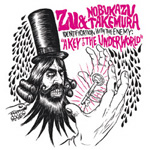 The Italian power trio Zu has made quite a career out of high-profile guest artist collaborations. Joint albums with Eugene Chadbourne, Ken Vandermark, Fred Lonberg-Holm and Mats Gustafsson have bolstered the group's impressive discography in the past few years. Identification With The Enemy is a different sort of meeting for the flexible trio, which joins forces this time with Japanese electronica artist Nobukazu Takemura.

One of the first club DJs to introduce hip-hop to Japan in the mid-1980s, Takemura quickly grew from battle DJ into a leading light of the glitch-based electronica scene. Edging ever closer to the avant-garde, he maintains a high profile on Thrill Jockey Records, sharing a similar aesthetic with labelmates like Oval, Mouse on Mars and Tortoise.

Of all the current electro-acoustic free jazz groups in existence, Zu is surely the most deserving to inherit Last Exit's crown. No other ensemble has arrived on the scene since the disbanding of Last Exit that wields as much raw sonic power as that esteemed quartet. Zu however, comes pretty damn close. While the throttling kick drum punctuations, sludgy distorted bass pummeling and squalling baritone sax eruptions that earmark the group's most extreme work are still present, the trio focuses on generating a pensive, dark ambient sound world with Takemura.

This music is primarily an exercise in restraint. The quartet weaves a web of brooding electronic textures that occasionally climax in fits of primal, focused violence. The twelve-minute drone of "Usual Conversations With Yama" is the album's epic ambient centerpiece, while "Everyone Gets His Own Nemesis" is the most animated excursion: presenting the collective at their most boisterous, it is an assault of slashing thrash rhythms, stabbing metallic bass riffs and caterwauling saxophone cries mixed with gauzy feedback loops and glitchy sine-wave pulsations.

The boundary lines between jazz, rock and electronica grow more indistinct year after year, and Identification With The Enemy is one more document of their gradual dissolution.

Visit Zu and Nobukazu Takemura on the web.

Alone With The Alone; The Culprit; Standing On This Zero Spot; New Buddhas In Stock; Usual Conversations With Yama; Awake In The Next Room; Everyone Gets His Own Nemesis; Deliver Me From The Book Of Self.

Title: Identification With The Enemy: A Key To The Underworld | Year Released: 2007 | Record Label: Atavistic Worldwide