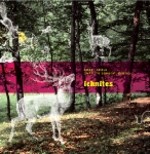 On Ichnites Pascal Battus plays rotating surfaces; these consist of small motorised components from inside old Walkmans or cassette players, which are used as exciters on different objects reacting as vibrators and resonators : sheets of paper, cardboards, plastic, wooden, metal, polystyrene pieces, and stems connected to cymbals. The results are small resonant sounds that hover somewhere between percussion and drone.

Alongside Battus, Christine Sehnaoui Abdelnour plays alto sax with such restraint, care and attention to detail that its sounds are hardly there at times. Adopting a range of blowing techniques, she extracts very different tones from the sax but never displays any great exuberance. This is completely fitting, as Battus produces sounds of such delicacy that they would be very easy to drown out. As with many successful improvising duos, Battus and Abdelnour mesh together so well that it can be hard to tell where the boundary between them lies.

The YouTube clip gives an accurate feel for the album as it was recorded live three days after the album itself was recorded. Most of all, that clip serves to emphasise that this duo provides a visual spectacle that is a natural accompaniment to the music, not least because it helps clarify the sources of the sounds.

This combination of sound and spectacle is reminiscent of the show put on by trombonist Mathias Forge and Olivier Toulemonde on acoustic objects; maybe it's a Gallic thing. However, as with Forge and Toulemonde, the visuals are a bonus, and this recording stands up well in its own right without them.