Home » Jazz Articles » Steve Harris Zaum: I hope you never love anything as much as I lov...

Steve Harris Zaum: I hope you never love anything as much as I love you

By Kurt Gottschalk
May 2, 2008
Sign in to view read count 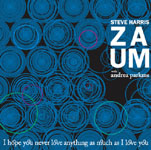 With a background in jazz, improv, funk, rock and rhythm and blues it makes sense that Steve Harris' music didn't come off sounding like any one thing. The drummer, who died in January, 2008 at the age of 59, may have been as known for his efforts close to home as his recordings—he worked as Music Development Officer for the Dorset County Council in Southwestern England, and was an active organizer of workshops and musical projects, often with children. But he did live to see the beginning of a series of reissues of his recordings under the band name ZAUM, as well as the release of his most recent ZAUM album, the octet disc I hope you never love anything as much as I love you.

As a composer, bandleader and percussionist, Harris had a wealth of styles from which to draw. But one would be hardpressed to find overt elements of any identifiable genres on the new record, recorded live in Dorset in 2006. It's not fusion so much as a purposeful eclipsing of style. Parallels can be made: with processed chanted vocals under layers of sound, parts can be reminiscent of Peter Gabriel's less poppy work; the guitar effects occasionally ring of some of Bill Frisell's earlier records and the samples mixed with guest Andrea Parkins' accordion create, at times, a vaguely Mediterranean feel.

But those are all qualities that drift by in the mix. The only thing that often leaps out of the sound bed here is Geoff Hearn's saxophone and even then it's not because he's forcing his way through so much as that his is the only acoustic melody voice. Hearn does step into the occasional solo, but he's also adept at hiding in the mix, as is Harris, whose strong, often sparse drumming nicely frames the group sound without pushing or counteracting. His website has been made into an online memorial with tributes from those who knew him. He may be gone, but his was a sound world worth investigating.

rise in sin; from dancing ledge; reid's palace; he knows how to drive but he never goes far; juarez; winter everywhere; watt's curve.

Title: I hope you never love anything as much as I love you | Year Released: 2008 | Record Label: Amazon Records